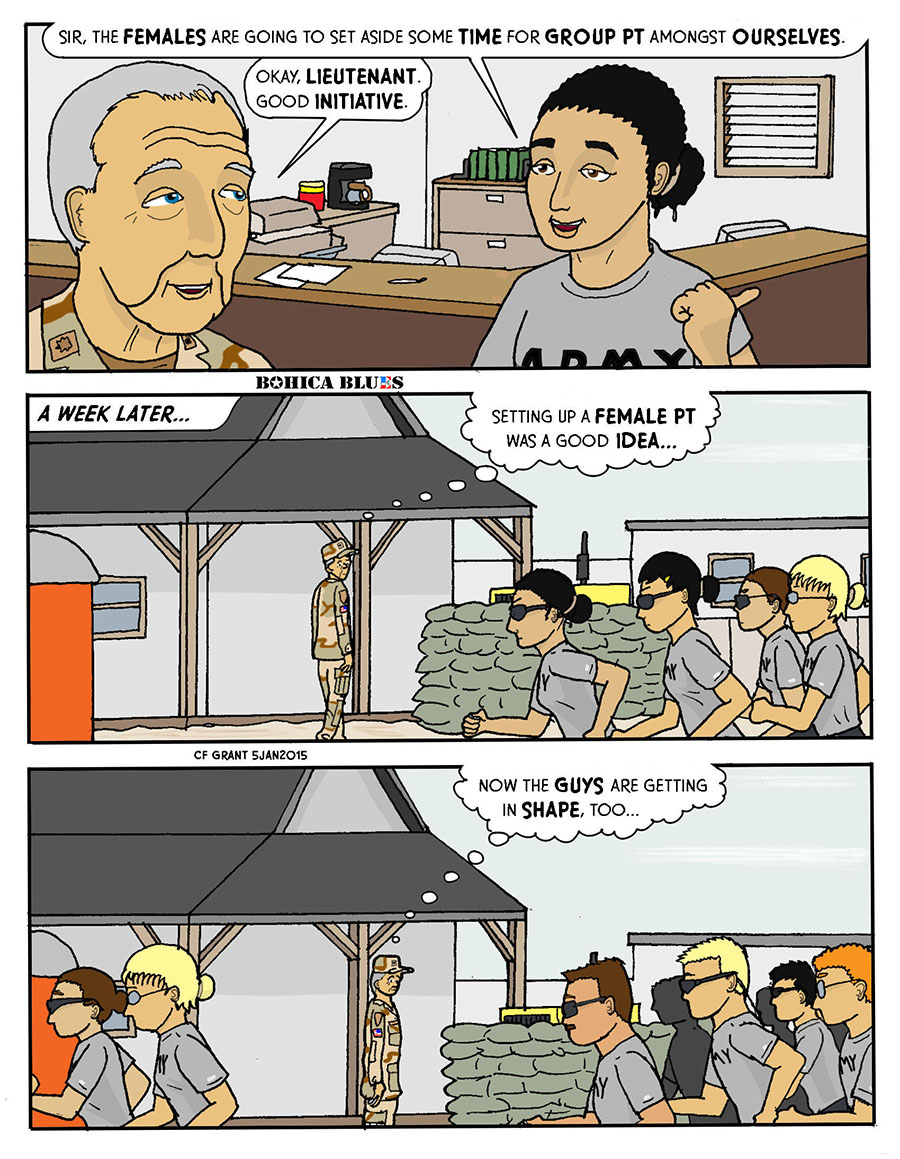 5 JAN:
For awhile, the unit I was in had a specific “female PT” set up by some of the women in the unit. It’s true that men and women gain and lose weight differently, pack weight around differently, and react to foods differently. A lot of the food in the military (especially in the field or deployment) has two things in common: it is the type of stuff that can be cooked quick, cheap, and in bulk (lots of rice and pasta, for example) and it tends to be calorie-dense because it is assumed you’re working it off.

Of course, a lot of people in the Army (all the military branches, really) have very sedentary jobs. Desk work is actually over half the work being done in the military, so a high-calorie diet that assumes physical exertion isn’t helpful. In fact we have food so plentiful and cheap now that it is possible to get fat while on deployment. The MRE (Meals, Ready to Eat) are especially notorious for this.

The Physical Training Test, or “PT Test”, has different standards for men and women but our daily physical exercise training pretty much has everyone doing the same thing– the same running, push-ups, etc. So people who are naturally lean, or naturally chunky –or different genders— have to find a way to tailor their physical fitness on their own if they want to assure peak physical readiness. Physical fitness and readiness is something of a political football in the Army (probably other services as well) for these reasons, and because it is hard to tailor exercises and readiness tests that accurately reflect what we are really expected to do. Every year or so someone comes up with different ideas, like combining male and female fitness standards into a universal standard, or having two separate PT tests– one for combat soldiers and one for non-combat soldiers.

The best thing about the current standard –2 minutes to do as many pushups as possible; 2 minutes to do as many sit-ups as possible; and a timed 2-mile run– is that it doesn’t require any special equipment. Proposed changes to the PT test have sometimes involved very elaborate plans incorporating balance beams, rope ladders, and so on… all of which sound great until someone looks at the cost of building these exercise obstacles and training facilities at every single base , including National Guard and Reserves, in the country.