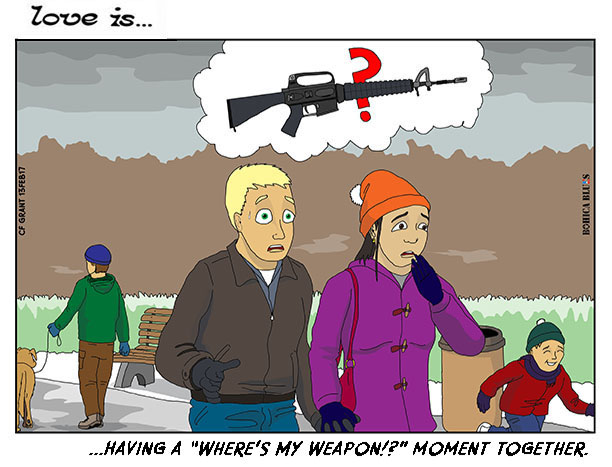 Just in time for Valentine’s Day!

One of the things that happens to a lot of returning veterans is having a “Where’s my weapon!?” moment. When deployed, we are issued our weapons and we must keep them with us all the time– literally, all the time: to chow, to go to the toilet, everything. Technically to the shower as well, although on the big base I was at (Camp Victory) that was overlooked as long as your roommate had possession of your weapon. The rationale was that someone could actually keep their eyes on the weapon, whereas in the shower you technically would not have direct sight of it.

After having your assigned weapon be a part of you for every moment of your existence, to suddenly be without it takes some adjusting. At first you’re relieved to be free of the responsibility, although at the same time you may feel vulnerable. But eventually, one day –long after you feel like you’ve made your adjustment back to normal life– you’ll be walking down the street and suddenly have this feeling that something isn’t right… something is missing… and then it will hit you. You put your weapons down somewhere and now it’s gone, and you’ll be helpless if you’re attacked. Then, as quickly as it hits you, you “snap out of it” and realize where you are.

I’ve had “Where’s my weapon” moments about three or four times since coming back. Sudden, surprise loud noises (car backfires, popping balloons) still startle me, but fireworks on the 4th of July no longer bother me since I know they’re coming. Still, it’s surprising the things that can be disconcerting even years later.