Talking With the Big Guy 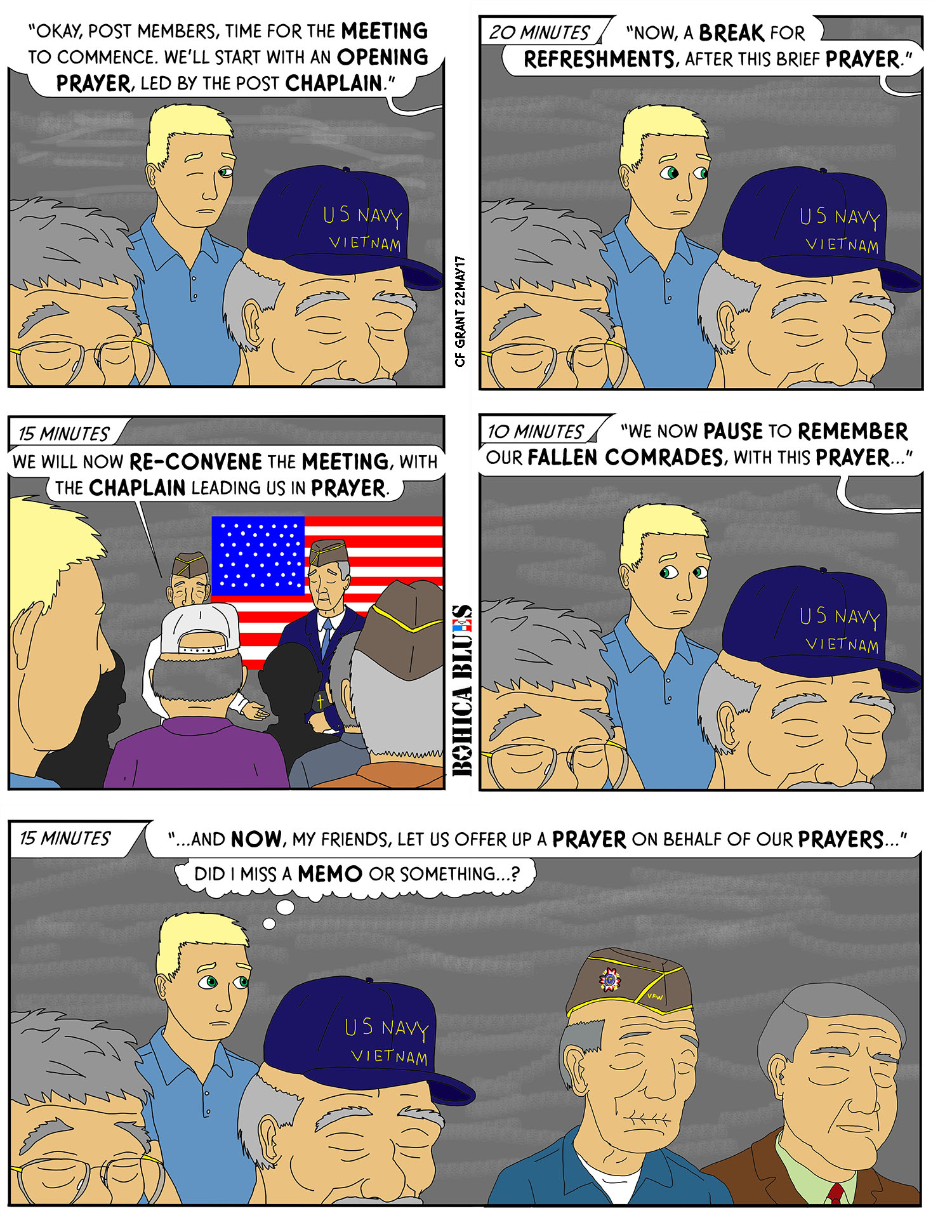 Talking With the Big Guy

I said before that I like and respect the Veterans of Foreign Wars organization, and in fact I am a member of the VFW. But I am not an active member. I don’t go to meetings and I don’t really read the local Post newsletter; and while I do read a lot of the articles in the VFW magazine and follow some of the political action work done on behalf of veterans through the organization, I have no contact with my local Post.

If someone asked me the reason why, I’d have to say that this comic accurately reflects my mood. I went to a couple of meetings shortly after my return from Iraq, and one thing that stood out more than anything else was near constant praying. Of the above comic, only the last panel –saying a prayer on behalf of their previous prayers– is hyperbole. A prayer to open the meeting, a prayer at the break, a prayer to re-convene, a prayer for fallen comrades, and then at the end there was a final prayer. During the meeting, events focused on a bingo game, a hot-dog feed, and an event with the Cub Scouts of America where they were going to teach a class about proper display and care of the flag, including how to dispose of it when it was no longer fit for respectful display. And of course the aforementioned prayers. Needless to say, I’m not a “churchy” kind of guy.

A friend of mine from my Reserve unit at the time was the Post commander and he asked if I’d be coming to any more meetings and I had to say I wasn’t planning on it. Most of the time, people guess that I was “offended” by the religious tone of the meeting, but it wasn’t a matter of being offended, it was more a matter of feeling that my time had been wasted. Naturally, my friend advised that I get active and change things, but I was one of maybe 4 or 5 recent Iraq veterans in a room full of 30 or more World War Two, Korea, Vietnam and Desert Storm veterans, many of whom had been part of that Post for as long as I’d been alive or more in the case of the World War Two and Korea guys. When a person is that deeply rooted, the last thing they have patience for is a “kid” showing up and rearranging everything.

I understand that the Vietnam veterans had a similar problem when they first started showing up. For awhile, there was the “Vietnam Veterans of America” organization that was formed, since the VFW wasn’t accommodating them or their concerns for a variety of reasons, some fair and some not.

For better or for worse, the VFW’s “old guard” has a home and a place where they feel comfortable. Meanwhile, I still have a full time job, military drill weekends once a month, and outdoor hobbies as well as this comic. I don’t feel a pressing need to go rattle someone else’s cage, especially if I’m going to be too busy with daily needs to maintain momentum and do follow-up on my desired changes. If there’s one thing the military taught me, it’s that all the effort in the world isn’t worth a damn if you can’t sustain the gains you’ve made. So I will wait and continue to support the organization from afar, while letting the comic be my voice.