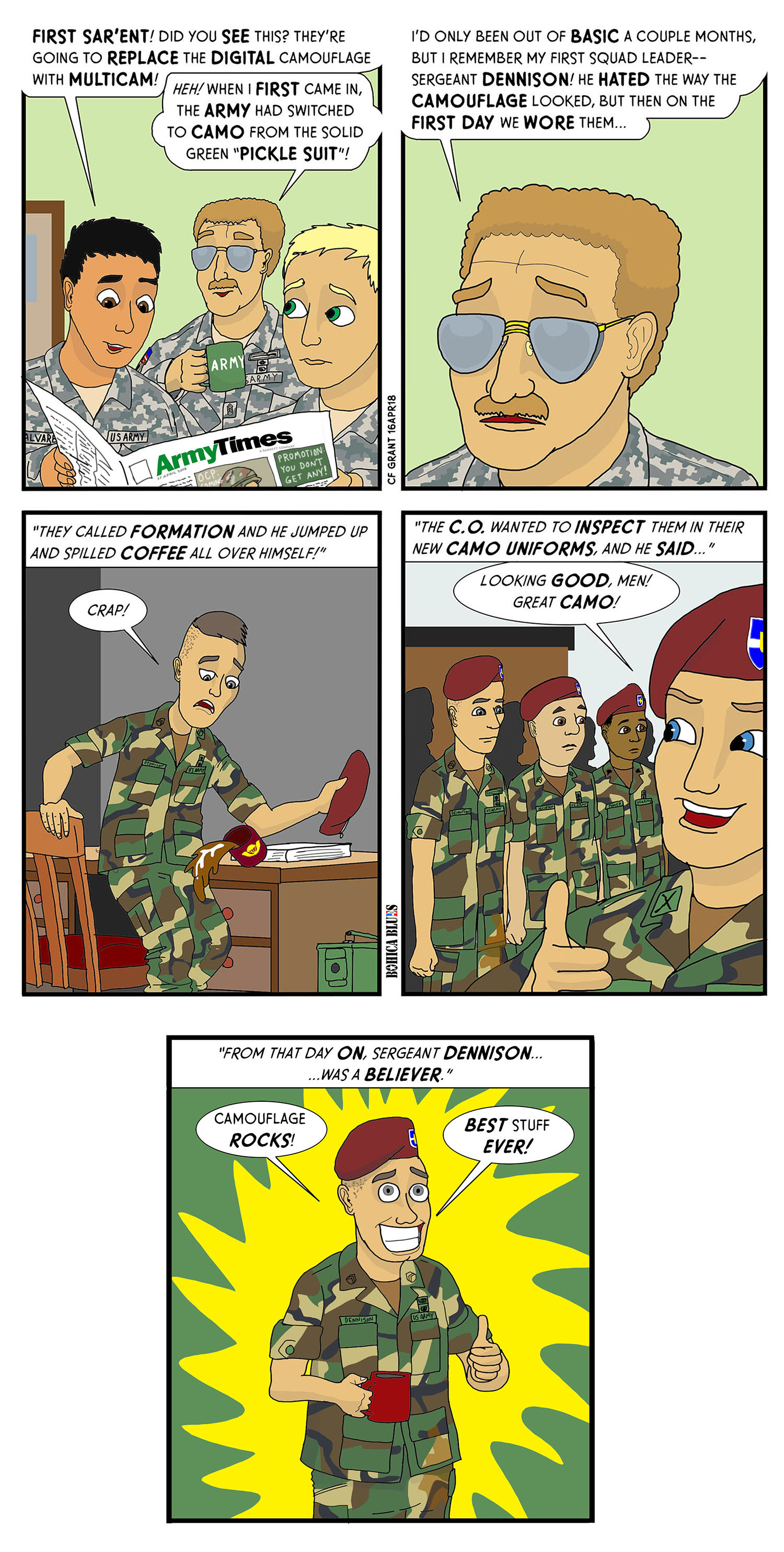 I joined the Army in the heyday of the Woodland B.D.U., or “Battle Dress Uniform”. Before that, the Army primarily wore solid green uniforms– camouflage uniforms were, for a long time, seen as a thing for Special Forces troops to wear… and even then, they only got to wear it in the field, and it was the “tiger stripe” pattern of Vietnam fame (whether true or not, that was the impression). Personnel who had been issued solid green “pickle suits” (as they were called) were at first allowed to continue wearing them until they wore out, and then replace them with Woodland camouflage BDU’s. So when I was a young Private, there were still about a dozen guys in my Company of 100+ that still showed up in formation with one-color greens.

But eventually, someone with enough authority decided to make the switch complete, and they issued a “drop-dead date” for the old pickle greens. So the greens were gone and we all wore the uniform that became synonymous with Army service, the Woodland style camouflage, which is one of the most widely recognized and distributes styles of camouflage in the world. For over 20 years the US Army wore that pattern, and the other services adopted it as well in short order. Even the Navy used it for some things, although ship crews still wore the blue “dungarees” for duty aboard craft.

This story about the coffee stains was related to me almost verbatim by a friend of mine who had been in the Army years before I showed up. He’d switched from the solid green uniform to the Woodland-camo BDU and, like in the comic, he thought it looked stupid at first. These days it is hard to imagine, but a lot of soldiers did not like the switch to camouflage. The spilled coffee stain he inflicted on himself, however, disappeared into the riot of new colors and patterns on the first day– camouflage was so new to everyone at the time that it was completely lost in the disruptive pattern. What would have been a reprimand for showing up in formation with a filthy uniform instead got a pat on the back and a “looks great!”

Nowadays we are used to camouflage and we know what to expect; even if we can’t articulate exactly what it is that sticks out from the norm –a subtly different color, a strange pattern that appears nowhere else– stains are more noticeable, but even today small stains and things like ink spots from crappy pens can go unseen. I, like my friend before me, am a believer.

As a side note, I am going to fast-forward a bit of time. The 213th Battalion in the comic switched to digital ACUs (Army Combat Uniforms) just a couple years ago in the story; now they’re hearing the rumors that the OCP (Operational Camouflage Pattern, based off the commercially successful “Multicam”) is going to be distributed as a replacement. In real life, it took about 10 years for the Army to realize that the ACU was a mistake and start talking about changing uniforms again. The change won’t happen quickly in the comic; it will be phased in over time just like the real change-over was. But in reality they would not be talking about this until 2014, when in the comic it is still around 2008 or so.