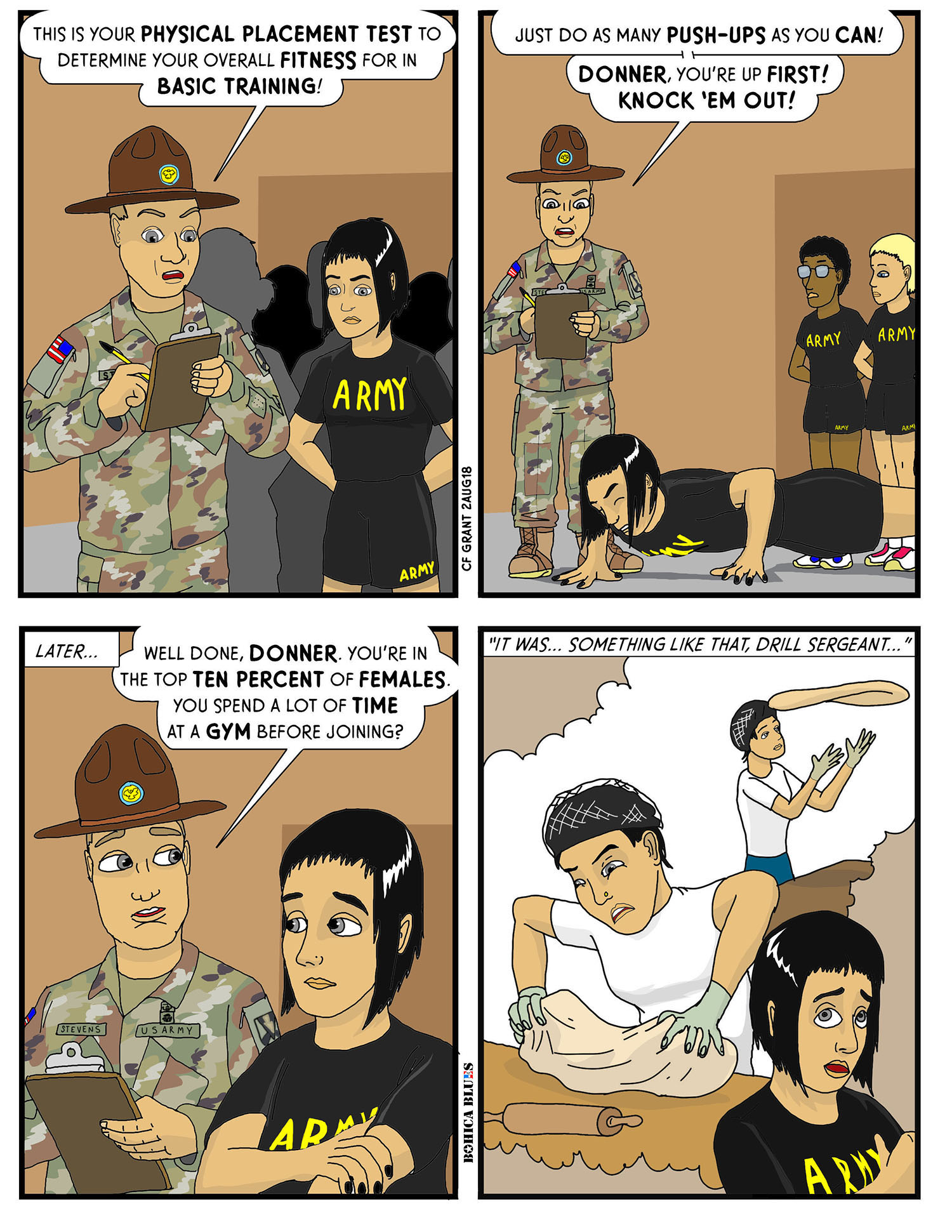 Sometimes… sometimes… you have a job or a hobby or some extracurricular activity that -without realizing it- gave you something you needed to do well in some other area that was unexpected.

Now, I’m not much of a cook, but I have tried baking things in the past and kneading dough can be hard. Especially doing it for long periods of time, over and over again, at work– remember that Nikki Donner has worked commercially in kitchens as a baker and tried to set up her own business at one time, so she’s had a lot of experience kneading dough on an industrial scale, so to speak. Wouldn’t you know it, but it gave her a bit of strength in the arms. Unexpected, but welcome.

What happened if she failed? Recruits that fail the initial entry test (at least when I went in) were sent to a remedial fitness unit. At the time it was called FTU, or Fitness Training Unit; the name has probably changed over the years. You stayed there for as long as it took, basically an eternal gym class until you graduate. When you finally did graduate out, you were simply added to whatever Basic Training unit was headed out next to become a part of them.

While kneading large amounts of dough gave Nikki an edge in push-ups, she has no such edge in running, which is the bane of many soldiers’ fitness tests. I enjoy cardio and never had a problem running, but on the other hand I hated the “boredom” of lifting weights, so that was (literally) my weak spot. I struggled with push-ups but could outrun most people on the track. For some reason, running is the part most of my peers dreaded, and they thought I was crazy for enjoying it.

You may also note that I am introducing the new uniforms now. It’s a bit early considering the timeline that BOHICA Blues is set in, but I am accelerating things just a bit. I’m going to shave off a few years here and then and maybe bring it up to a time period within the last 5 years or so.

However, meanwhile Nikki Donner will go on to Basic Training, so we’ll get a chance to see what that is like. Please comment along and share any memories you may have had, and don’t forget to check out the Facebook page and Patreon!