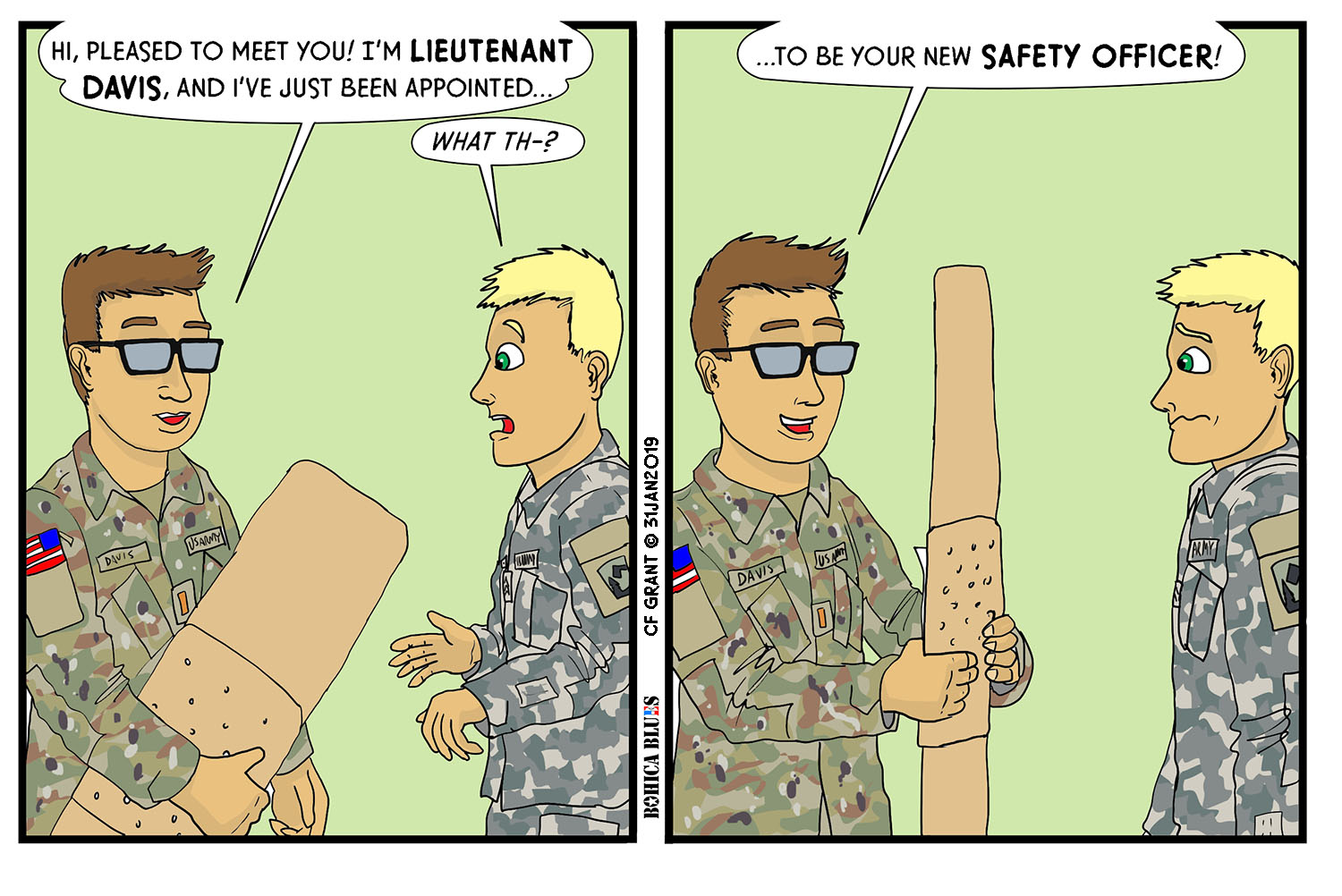 Ahhh, collateral duties. Pretty much every officer, and a lot of NCO’s, are going to have at least one. Of course, it’s not like you get some sort of sign or badge or anything; I have no idea who my unit’s actual Safety Officer is. Sure, they do safety briefings at least once a year, or sometimes we’ll have a special safety briefing, and we’ll see our Safety Officer, but otherwise I have no idea who he is. Same with a lot of the collateral duties. They made me Master Driver for a bit until it became obvious that I had no free time at all to devote to the task. No one knew I was Master Driver for my brief duration.

SHARP reps, Retention NCO’s, Security Officers, you name it, a lot of people wear different hats and I think there should be some sort of badge of office that goes with them all. For Sam Davis, a big huge Band-Aid to carry around. Safety Officer is sometimes an extra duty that officers seek out, because if you’re assigned to be the Safety Officer, I believe you’re not supposed to have any other “extra duties”.

So now we have Sam Davis, a brand-new Second Lieutenant in the 213th. Who is he? Well, he’s a real guy, a Patreon supporter who is at the “Platoon Sergeant” level of Patronage. I discussed with him a character to place in the story, to be used whenever it is fitting, and so here he is! I’ll do a few comics with Sam to integrate him into the ol’ collective consciousness, and any other reader can have a character in the story as well by supporting BOHICA Blues at Patreon!

There’ll be a few more names cropping up soon as a number of people have joined Patreon at various levels that allow for me to mention them in the comic from time to time. Some people have already been mentioned, and will be mentioned again. I’ve been meaning to do this for a long time, and been planning to for over a year but Real Life concerns haven’t allowed me much time to draft up new characters. Sam has been very patient, although I have to admit another Patron was willing to support the comic but I couldn’t commit fast enough. Bit of a wake-up call for me I admit.

But now things are moving and with the 213th Battalion mobilizing again, I have the opportunity to bring in lots of new people! So hop on over to Patreon and consider “signing up”! You can cut & paste the link below, or click the button up at the top left– it’s the one that looks like the “Pinterest” symbol (couldn’t make a Patreon one at the time the button was activated). But pretty soon we could literally see you in the funny pages!