The New Taji; Same As The Old Taji 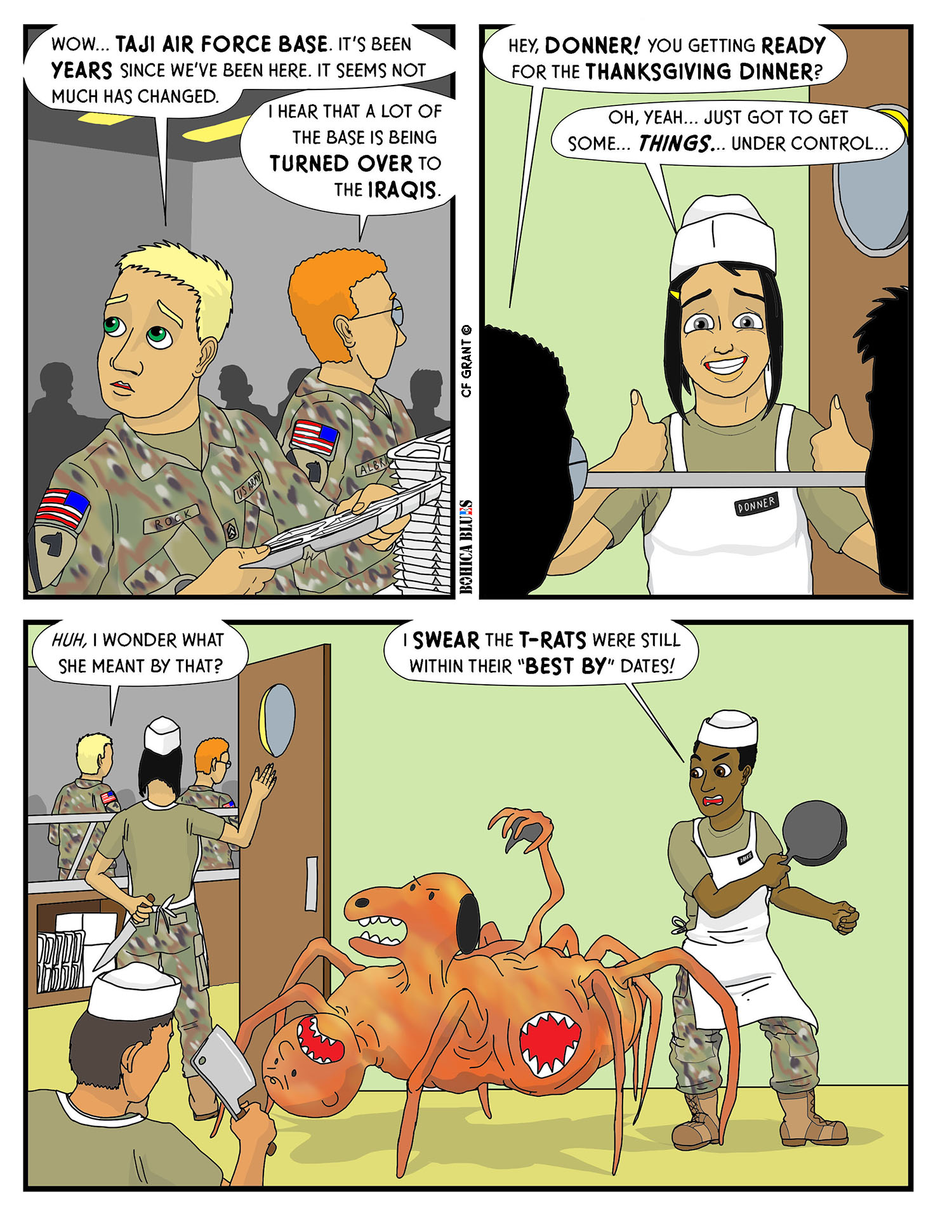 The New Taji; Same As The Old Taji

We’re getting back on schedule, and I want to thank everyone for being patient and sticking with me through these times. In artist is nothing without an audience to appreciate their works.

So, the guys reached Taji. I was at Taji in 2005 –I know it is “officially” known as “Camp Cooke” but at least when I was there it was always known by those of us on the ground as “Taji”. When I was at Taji the accommodations were rustic compared to Camp Liberty. I looked at Google Images for shots of the “Taji” and “Camp Cooke chow hall” but found a lot of things that didn’t come close to my recollections– obviously there was more than one chow hall. The one I was at was very close to the famous Tank Park so I suspect it was an outlier– I remember a place made up of a large tent-like structure and bare plywood floors.

Anyhow, the exact setting is secondary to the story of course… and the story in this case reminds me of the famous John Carpenter movie, “The Thing”! I took the opportunity to pay a bit of homage to the famous “Peanuts” comic strip that was an influence on me as a young comic artist and incorporate it into the Thing. There was the famous scene where the Thing took over the physical form of the sled dogs and at one point the dogs “melted” into the creature form… I read the original short story, the book, and saw the 1980’s movie so I couldn’t resist.

I also couldn’t resist making fun of another Army staple– the “T-Rats”, or “T-Rations”. Technically, they are “Tray Rations” and they are pre-made sealed trays of food, fully enclosed (kind of like a giant sardine can), that just need to be heated up in hot water, opened and served. One thing to remember about cooks in Iraq was that they weren’t allowed to cook– that was reserved for civilian contractors. However, anyone who can boil water can serve up a Tray-Ration or T-Rat. Cooks could, if I remember correctly, handle T-Rats for serving in the field.

What got me thinking about the possible dangers of T-Rations? Well, I have been in the Army in various capacities (Active, Reserve, Guard) for over 20 years… I’ve collected a number of things over the years. Including, apparently, an old T-Ration pack of Spice Cake. I found it when I was going through old things at my mom’s house; there was a whole room full of my old stuff– things I’d collected over the years. Usually that’s old clothing, uniforms, a few extra canteens or sleeping pads, that sort of thing…. but apparently I had also scooped up a Tray-Pack as well.