Blending Right In There 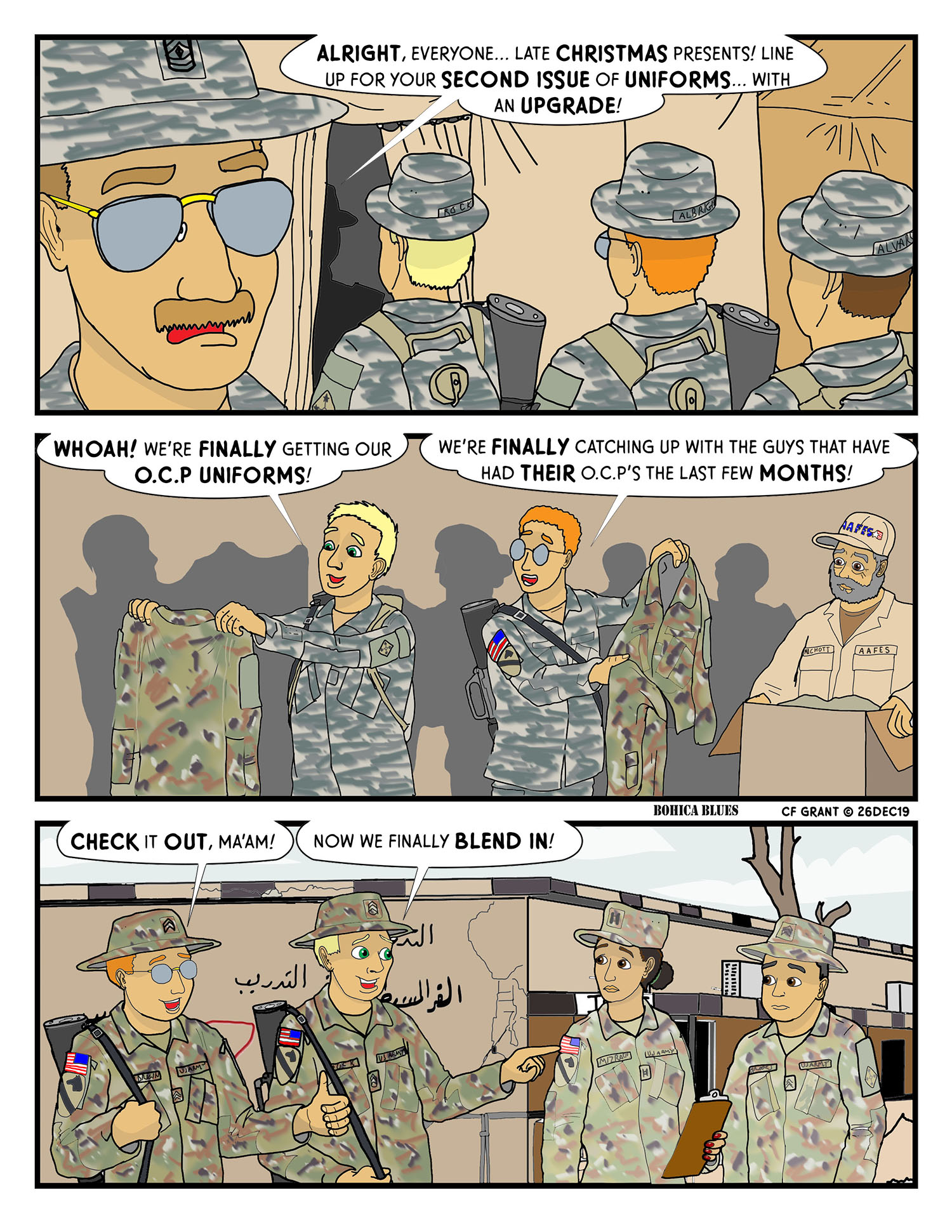 Blending Right In There

Wow, I hope it is obvious what is going on here!

Anyhow, when I was over in Iraq, one day we got our “second issue” of uniforms. The Army figures that sooner or later, your uniforms are going to wear out and you’ll need replacements. They give you new ones, but hey, if your initial issue of uniforms are still in good shape, well, congratulations, you have an abundance of clothing to keep clean and look spiffy in!

Another thing that happened to me while I was over there was one day, we all got pulled into some big tents where there were rows and rows of tables and guys handing out gear. I got a new flashlight, a great pair of rugged, sturdy desert boots (don’t remember the type), and my first pair of Wiley-X sunglasses. I guess it was a promotional giveaway of some sort. For Wiley-X, it worked on me; I ended up getting three or four sets of Wileys over the course of my career. But for this comic I wanted to blend the experiences, and use a sudden surprise issue of uniforms in a bunch of tents to be the kickoff for the guys getting their new “OCP” or “Operational Camouflage Pattern” uniforms.

I’ve spoken with some civilian friends and they’ve mentioned that they try to follow BOHICA Blues but find the military slang & jargon hard to keep up with. I try to make it so that the “milspeak” isn’t necessary for the comic to work. In this case, for example, you don’t really need to know what “OCP” means, just that there are obviously different uniforms being handed out. This reflects real-life situations where a new type of uniform is issued, and for awhile troops in the same unit will be wearing different types of camouflage. I’ve had some characters wear “OCP’s” in the story so far, and even commented on it directly when Private Nikki Donner came back from Basic Training and Cook’s school with new OCP’s, and she was the first one in the unit to have them. Then, as troops came in from other units, they already had their OCP’s, so they could be seen side-by-side with other characters and realize that the differences.

I probably could tone down the jargon but at this point –after 6 years– it may well be better to keep on keeping on. May as well keep blending in, right?