Out With the Old; In With… Whatever. 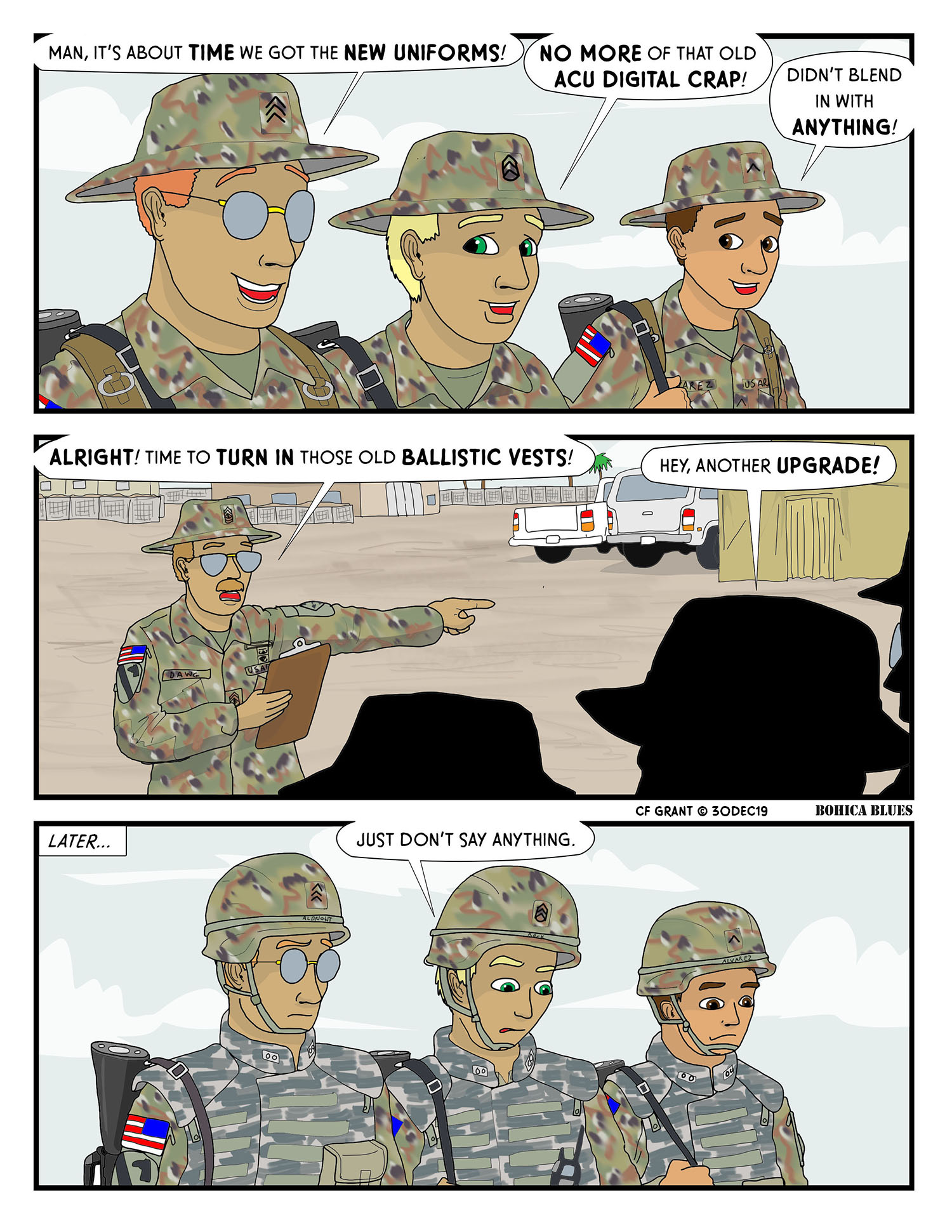 Out With the Old; In With… Whatever.

For years and years, the Army had plain old Olive Green color equipment. Backpacks/Rucksacks, equipment belts, ammo pouches, etc. Everything was green, green, green. When the Army went to all camouflage uniforms in the 1980’s (the mostly green and brown “BDU” or “Woodland” Battle Dress Uniform), they just kept the green colored outdoor gear since it pretty much blended in anyway. A few Desert Sand colored items were made, but not many.

There was a kind of half-hearted effort to start making camouflage field gear– a few of the BDU/”Woodland” rucksacks were made, I remember, but they were rare and at least to me it seemed like little effort was made to equip these items Army-wide. We kept trucking on with the solid green stuff, even though over the years it was fading to a sort of pea green and even almost yellowish in some cases.

And then we got the digital Army Combat Uniforms, or dreaded “ACU” uniforms. And suddenly, the budget spigots were opened wide. There was no mountain that would not be moved to make sure that each and every piece of Army gear was made in that god-awful digital style camouflage of grey, pale green, and darker green. They pushed and pushed that stuff out like a dam had burst. Belts, ammo pouches, rucksacks, you name it– they made sure everything was “ACU”.

And then ten years later, ACU camouflage was junked as one massive failed experiment. The Army had wanted one universal camouflage pattern that could blend in anywhere, and got something that never quite fully blended in with anything (unless, perhaps, it was Grandma’s paisley-upholstered couch in low light conditions). First the Army gave special allowance for troops in Afghanistan to wear the green-and-brown based “OCP” or “Operational Combat Uniform” pattern since troops were literally paying with their lives in Afghanistan using the ineffective ACU style camouflage. Finally, the Army admitted that OCP was better than ACU, and switched.

But this time, there seems to be a lack of enthusiasm for trotting out gear in the OCP pattern. I’ve seen some packs in OCP camouflage but not many; I’ve also heard rumors that instead of camouflaged field gear, the Army is going to issue stuff in Coyote Brown (which would actually be kind of cool, not that I’m biased in any way).

But guess what we still have literally tons and tons of, sitting around, waiting to be issued? That’s right, tens of thousands of pieces of gear in ACU camouflage that were firehosed out into the supply chain, like flotsam from a long-ago shipwreck that will wash up on beaches for years to come. To this day, my uniforms are OCP, but every piece of field gear given to me is still in the useless ACU pattern. Can we pawn it off on surplus stores any time soon? Please?

In other news, this is the last comic of the year, so enjoy; more will come in 2020 of course. In the meantime, if you’d like to help support BOHICA Blues and get a peek at some insider stuff, other comics I’ve done, and so on, you can consider supporting me on Patreon! Follow the link and consider joining the 213th Battalion for all kinds of crazy extras!
https://www.patreon.com/Coyote