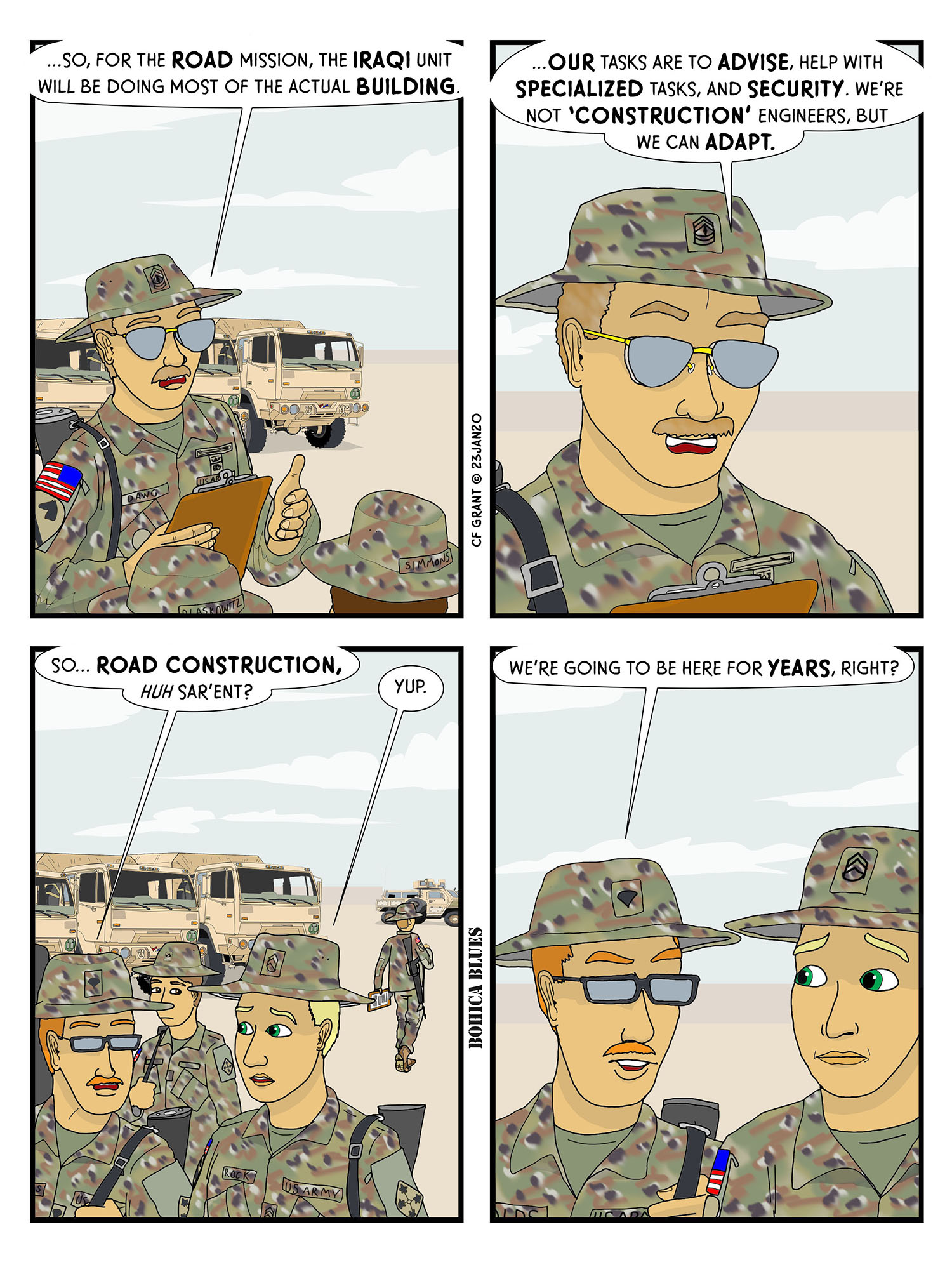 Well! So, this has been an adventure!
SO as many of you know, the BOHICA Blues site was down for about 4 days. There appears to have been an issue with the webhost; not sure exactly what. It is finally back up and running again. This comic was supposed to be for Thursday but is now being used instead here, which is why the date is off.

Anyhow, so as far as the story goes, yes– the 213th Battalion are all “combat engineers” and that term is used to apply to a wide range of skills and duties. There are “vertical construction” engineers, which build structures with walls and roofs. In a “vertical construction” unit you’ll find carpenters, bricklayers, and the like. There are also “horizontal engineers” that build roads, install culverts in roads, and such. Then of course the “combat engineers” which are supposed to alter the landscape as needed for effective fighting: digging trenches and foxholes, applying sandbag barriers, putting in or taking out mines and barbed wire, etc.

The thing is, “combat” engineers are sometimes put in a position to do some of those other things– usually to work as “horizontal engineers” and build roads. My combat engineer battalion back in the later 1990’s was on road and culvert construction duty in Panama, and some of our guys were assigned to help mix and pour the cement to help build a school– so, vertical construction for them. This type of stuff is not normally in our assigned duties, but we can adapt readily enough. We are not expected to do plumbing or electrical, thankfully, which are pretty specialized skills.

Whatever the task conditions are, we have to be flexible and adapt to them as best we can. Road construction is one of those things that has its own humor, usually revolving around how long it takes to get simple tasks done. And of course how a road that was just all torn up a month earlier gets torn up again for something else.

Anyhow, enjoy today’s comic and I hope we don’t have any more problems with the webhost. Take care and remember to drop by the Patreon page and toss a coin to your artist, O valley of plenty, and enjoy some of the other benefits offered there.
213th Battalion Patreon page: https://www.patreon.com/Coyote