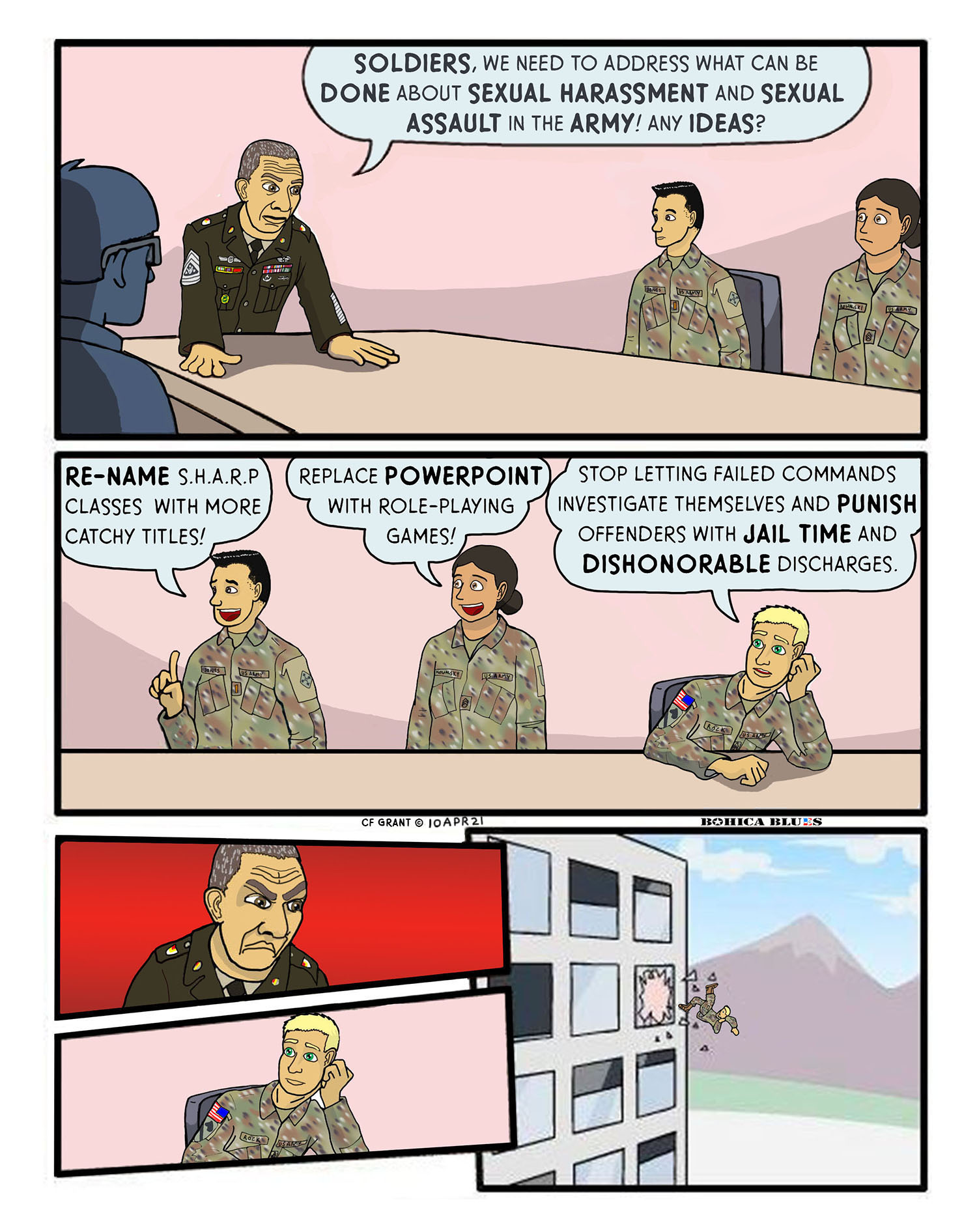 Today’s post has a special guest appearance by Sergeant-Major of the Army Michael Grinston! Why SMA Grinston? Because he’s in a position to Do Something About The Situation and I am eagerly waiting to see what –eventually– that will be.

Not too long ago (the last couple months actually) the Army crowdsourced among the ranks for any ideas on how to make the SHARP program “better”. SHARP is the Army acronym for “Sexual Harassment Awareness (and) Rape Prevention” and it is the latest in a series of attempt to address the problem of sexual harassment, sexual assault, and rape within the ranks. It is probably better than previous attempts to address the issue, but a lot of people still feel that it falls short.

Anyhow, the attempt at crowdsourcing produced some ideas, a couple of which I paraphrased above. One person suggested what amounted to a complete redecoration of the program, with different names and logos and mascots (including what was, to me, a cringeworthy comparison to the “purple dragon” motif used for cybersecurity awareness). To me, coming up with new catchy names and a mascot was little more than rearranging the deck chairs on the Titanic. And what the hell kind of “mascot” can you come up with for SHARP? Rapey the Clown?

Another person volunteered the idea of hiring top-notch Hollywood film producers to make much better videos that were more dramatic, more serious, and more realistic; yet another came up with the idea of using virtual-reality to create an artificial, fully-immersive learning environment where a person could experience life as a person targeted by sexual harassment.

These were considered the “winners” of the crowdsourcing contest.

All of the ideas that were floated completely missed the real issues, in my opinion. People who commit sexual harassment and sexual assault need to experience something all right, and it is something that few of them have encountered: consequences.

The thing that stands in the way of handing out consequences is that, to this day, commands in which sexual assault has taken place are allowed to investigate themselves. In my opinion, you’re putting a failed command in charge of finding faults within itself. Why is it a failed command? Because they have apparently created an environment where sexual harassment was allowed to operate unchallenged, and predators felt they could act with impunity. Actively or passively, they felt that command more or less had their backs.

It only takes a single act of harassment to go unchecked, and pretty soon others notice that this is a behavior that is treated as a non-issue by the Powers That Be. It only takes one incident where a sexual assault is belittled or downplayed, and an assaulter is defended as “a good worker” and a “motivated soldier” with a “stellar career” and so on– and from that point on, victims know their complaints will fall on uninterested ears, and assaulters know that as long as they maintain a good PT score and have a few awards under their belt, the command will give them the maximum benefit of the doubt.

And then the command can’t figure out why they have a sexual harassment problem, and figure it is just a bunch of whiny malcontents. After all, they checked the box and did a SHARP powerpoint twice a year, right?

Sergeant-Major of the Army Grinston so far actually seems to be genuinely interested in the welfare of the troops. Let’s hope he takes this as seriously as he has so far taken things like the ACFT.