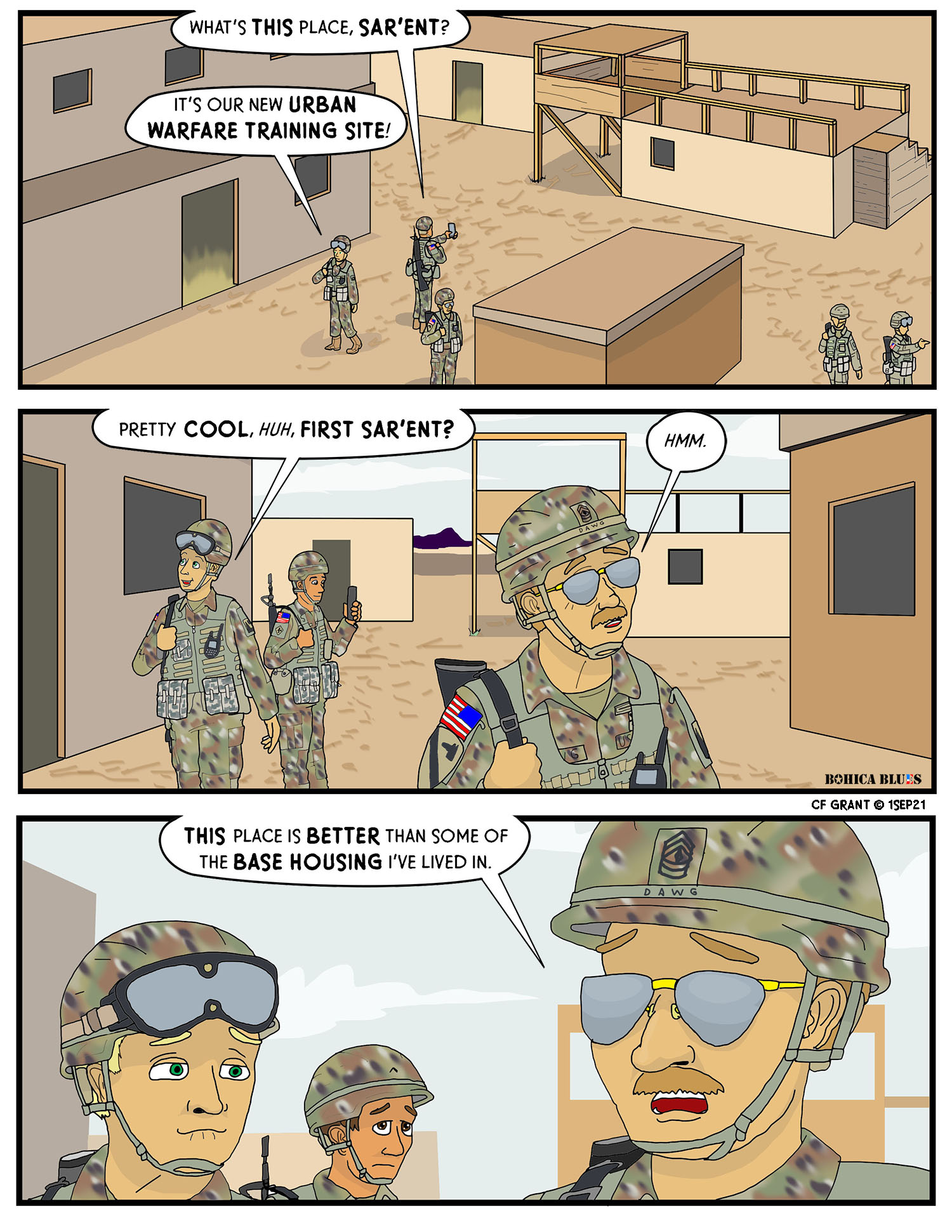 Whole fake villages for urban warfare have been created at posts all around the US and even some overseas. They vary in quality, with the majority of them being made up of quick prefab materials and shipping containers that have been slightly modified. However, some of them are incredibly elaborate and detailed.

When I first joined the Army I was in the Infantry, and we did a week-long urban warfare course in a very well-made “German village” designed to simulate the terrain we’d be defending in a Cold War style “Soviet attack” across Europe. The village had a name which I don’t remember, but it was very well done and quite detailed. The buildings had good architectural similarities, the streets looked right, the road signs were all in German and placed in logical points along the road– it was super elaborate.

And then there’s on-post housing. A lot of soldiers live on the base (in fact, that’s usually the default arrangement) and some on-post housing is pretty dismal. For families there are, technically, whole subdivisions built on post– little bits of Middle America for anyone who wants it. But these are usually in very short supply and when I was on Active Duty, they were doled out by rank. So most of them were full of higher officers’ families, and the chance that a ordinary Sergeant with a family could score an on-post single-family home was pretty much zero.

Most soldiers with families had apartments on post to choose from, or they lived off-post but nearby. Regular soldiers, unmarried and with no families to take care of, were required to live in barracks that were supposed to be located close to their unit of assignment. Unmarried soldiers could sometimes get permission to get their own apartments, but they had to have permission from their Commanding Officer (C.O.) and there usually had to be “mitigating factors” such as extreme barracks overcrowding. Of course, the soldier had to have a record with no disciplinary actions. Even then it was incredibly rare.

On-post housing these days has a bad reputation. Barracks, apartments or houses these days are plagued by stories of poor construction, electrical and plumbing problems, inadequate ventilation, and even being full of mold and disease. There have been off-and-on attempts to address these issues every so often, but they are rarely sustained efforts that are uniformly applied. Some bases have built decent barracks and such, but there is a lot of progress yet to be made if even half that tales I hear about are true.

Given some of the stories about on-post housing I have heard, it would almost be tempting to grab a cot and sneak out to the urban combat range and camp out. At least you know what you’re getting.