The End of the Maze 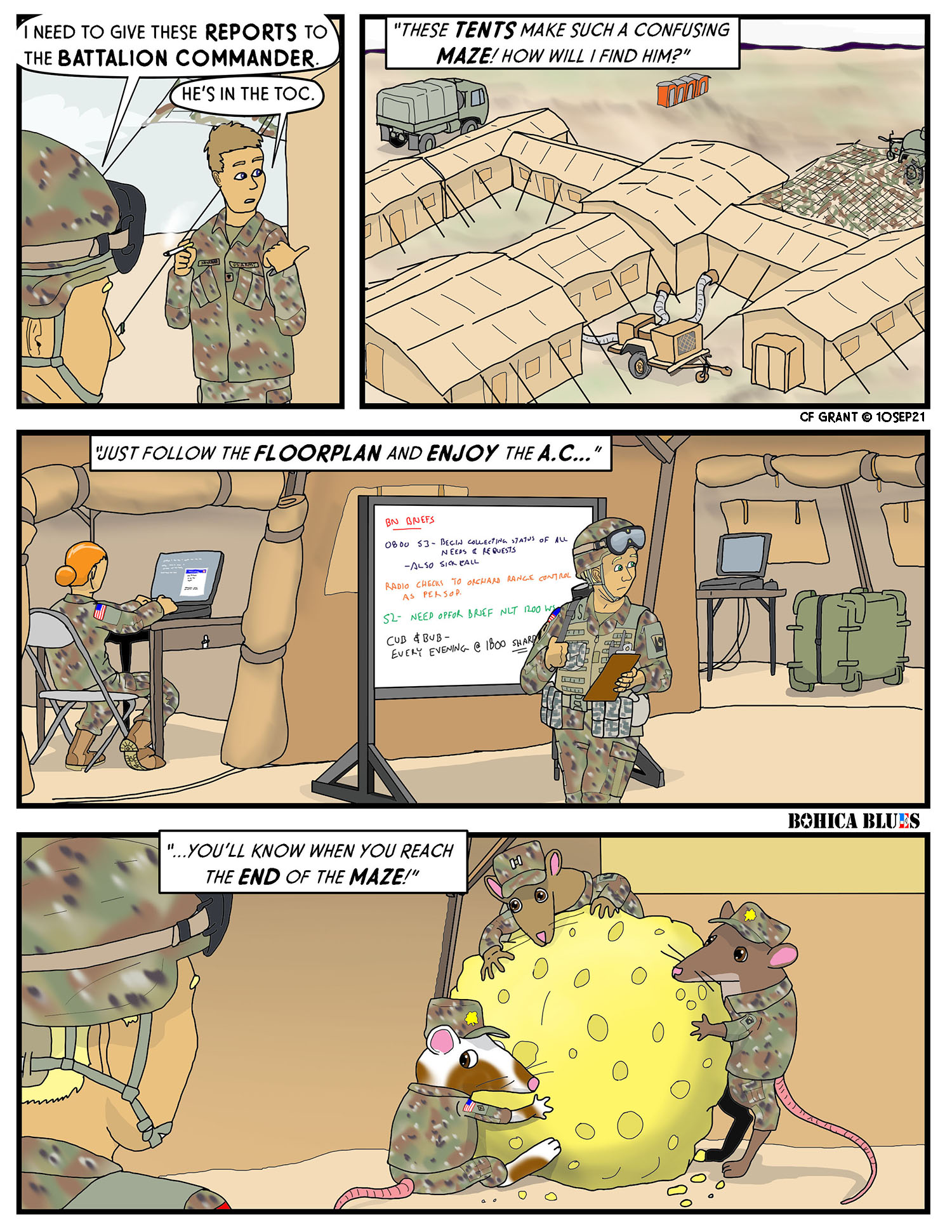 The End of the Maze

This (admittedly, somewhat fancifully) reflects an amazing tent structure I saw during a recent Annual Training downrange. A massive Battalion headquarters tent assembly that was referred to as the “Taj Mahal” by the Battalion Commander was set up. It was an impressive sight to behold.

A “TOC” is a “Tactical Operations Center” and pronounced as one word; it kinda sounds like “talk” which confused me when I first heard it as a young Private, all those many years ago. A TOC is specifically a field headquarters– the brick-and-mortar headquarters building we work in during regular duty days is not generally referred to as a TOC.

But our downrange TOC was a massive, sprawling affair; one big central tent with multiple smaller tents branching off from it, each branch holding different elements of the staff that carried out there tasks while downrange. There are typically also tents dedicated to communications operations (various radios and sometimes field phones), there might be some for storing supplies that will be immediately needed, and so on.

The TOC I was in also had a pair of large generators and even trailer-mounted air-conditioning units. The tents are impressive affairs– the old days of sticking a center pole under some canvas tarps are long gone. Today, the tents are supported by internal aluminum frameworks and you can have a lot of internal space without having to dodge poles in the middle.

A TOC set up for a Brigade, Regiment, or even a Division would be much larger and more sprawling. The tents, connected together by opening flaps and sealing them to each other with velcro, become like mazes. The fact that everything is the same color and has essentially the same basic layout due to military uniformity can really confuse visitors.

Here, I have capitalized on the “maze” idea: mice in behavioral science experiments have to navigate through a maze to get to the reward of cheese at the end… and on top of that, the term “eating cheese” is often a euphemism for “kissing up to the boss”. Rank-and-file soldiers frequently make wry comments about the Staff officers hanging around the Commander and “eating cheese” all day so they can earn favors ranging from easy duty to promotions.

There are a lot more details I could go into about the background of these terms, but… bear in mind I try to keep BOHICA Blues somewhat family-friendly.