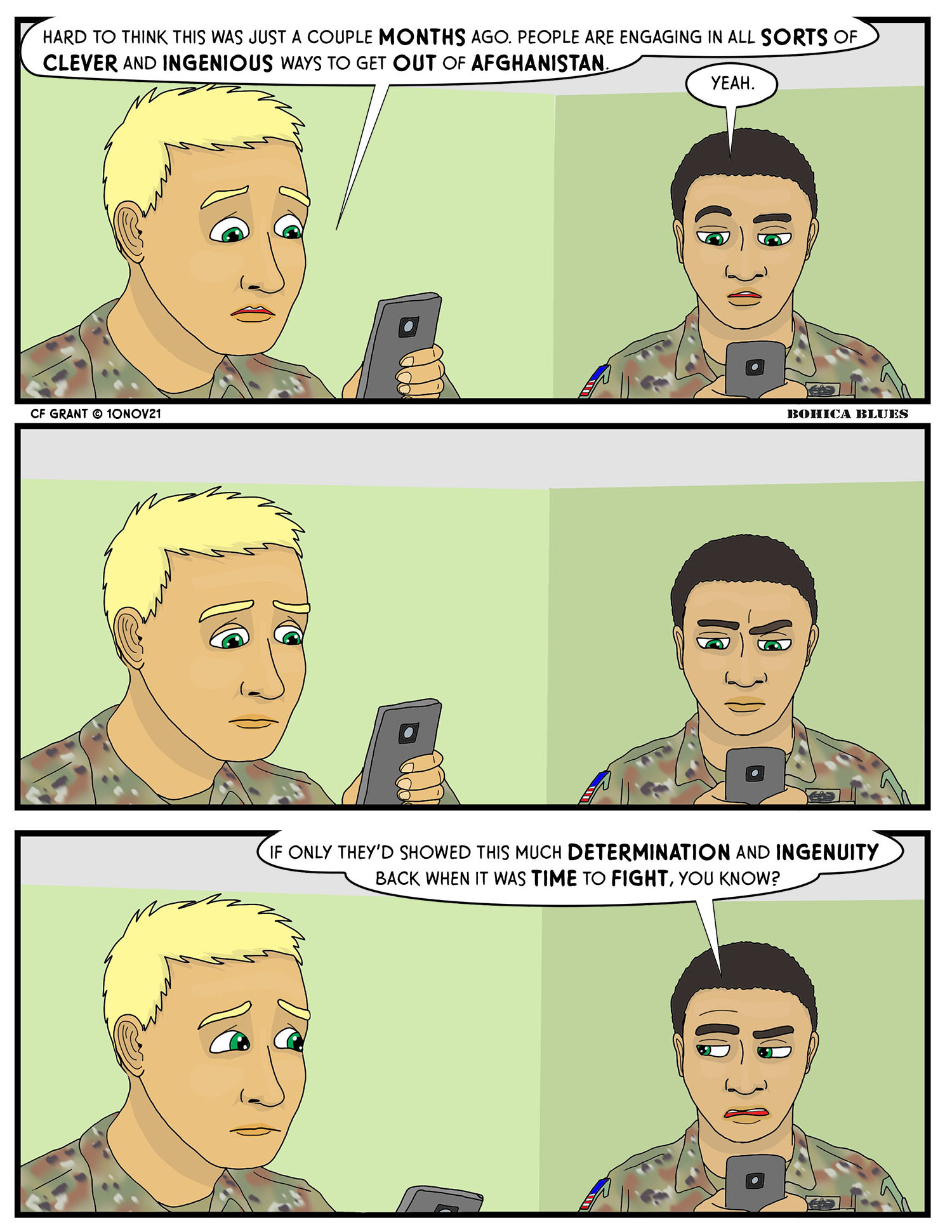 Kind of a long post today, and maybe a bit meandering. It is my take on the Afghanistan situation, told from a person who, admittedly, didn’t deploy there and is not an expert on the region in any way socio-political or anthropological. But after every action in the Army, there is an “After-Action Review”, where we try to figure out what we tried to do, what worked, and what didn’t. This is an After-Action Rebuke.

Lots of thoughts the last few weeks about Afghanistan– everything; the involvement in the first place to the pullout, and everything in between.

A lot of humor is based on frustration. Frustration with our jobs, our daily lives, little things– commutes, prices, poor communication in a relationship… even little, petty things. Not finding a good parking place; things that you feel silly about later, when you think about your frustration.

But then there’s futility, and I think a lot of people felt that. Specialist Saltee certainly represents that. He deployed there, put a lot of himself into that mission, got invested in the people he was with, comrades and local civilians alike. And then it was all up in a puff of smoke.

People might blame a political administration, and there’s plenty of blame to go around. Right now, Joe Biden is in the hot seat ’cause he’s the guy that happened to have his hand on the wheel when it came to an end, but on the first day we landed troops in Afghanistan, we had only a vague notion of what the end game looked like. George W. Bush said we weren’t there to nation-build but in a way we were, and we were just there to get Osama bin-Laden, but after the Tora Bora mission, he said bin-Laden was “irrelevant”. The boundaries were beginning to blur and shift from the start.

Then, Barack Obama finally *did* get Osama bin-Laden, and I think everyone expected him to declare victory and go home… and really, I don’t think anyone would have been surprised. I think it was expected. Yet we stayed, and had to search for meaning and purpose. We meandered and did some random stuff, but there didn’t seem to be a plan. Then Donald Trump met with the Taliban at Camp David, behind the backs of the actual Afghanistan government we were supposed to be supporting, and cut a separate deal. Then it got handed off to Joe Biden, who knew there was a deadline but seemed to fulfill it at the last minute as an afterthought.

Nobody, and I mean *nobody*, had clean hands in any of the administrations.

Sometimes folks like to widen the scope, and say it was an “intelligence failure”– that the end of it was a too-hasty botch job. But again, I’d say the real intelligence failure happened at the beginning, when we fundamentally failed to understand Afghanistan as an entity from the start.

Tribes and clans exist side by side, diametrically opposed to one another over ethnic reasons or religious ones, or social interpretations, or whatever. And while they disagree and carry out feuds that last for generations, they also have to live together at the same time. They’ve worked out a system that is complex and layered and makes no sense to anyone outside of Afghanistan. They make their own deals, cut their own bargains, pre-negotiate tit-for-tat allowances and indulgences that maintain their delicate balances because that’s what they need to do to survive.

Outside powers go to other countries for centuries and play one side against another. In America, people played Arikara against Sioux. In Africa, people played Ndwandwe against Zulu. Outside powers would pick a champion and use them to further their goals in a region they were contesting. But the times are changing, and “business as usual” didn’t work this time. It stymied the Soviets and the British. Thousands of Afghan troops even fought and died side-by-side with the allied forces, just as they did in countless feuds before which were part of the cost of doing business in Afghanistan. We, like other foreigners before us, were just another tribe that came in and did some business before leaving.

The sad truth, at least from my point of view, is there was no clean, easy, or unbloody way to get out of Afghanistan. There was no way to stabilize it without generations of sacrifice, and even if we did manage to stabilize it in some way that pleased us, five minutes after we left the Chinese, Iranians, and Pakistanis would have run in there as fast as they could and turned over everything we had done, down to the last street sign. We would have had to stay there, constantly fending off challenges from every neighbor, who would have been more than happy to keep the US bogged down in a constant, never-ending bleeding wound.

Just upping stakes and leaving was the least bad of a menu of bad choices. There was no “getting better”. There was no eventual dawn to look forward to. Just endless slog.

So SPC Saltee is frustrated and upset, and he should be. That is the human cost, seen from his individual, human eyes. He wants it to mean something. But maybe what it means isn’t what we expect– we look for our sacrifices to build to something lasting and good. I think what it means is: we should always question what is going on when someone decides to send the flower of our youth off to some distant land to kill and die in our names. And make damn sure it is sustainable, and defensible– both ethically as well as militarily.

Take care and look out for each other, and if you know a veteran that needs to talk to someone, and having a rough time, pass this on:

And before you hesitate, think about this: if you were trying to take an objective, and needed air support or artillery support… would you hesitate to call? Would it be “weak” to call for proper, offered support in the field? Of course not– it’s what you do to get the mission done.

If you need arty support for your soul, then you just call it in, brothers and sisters.