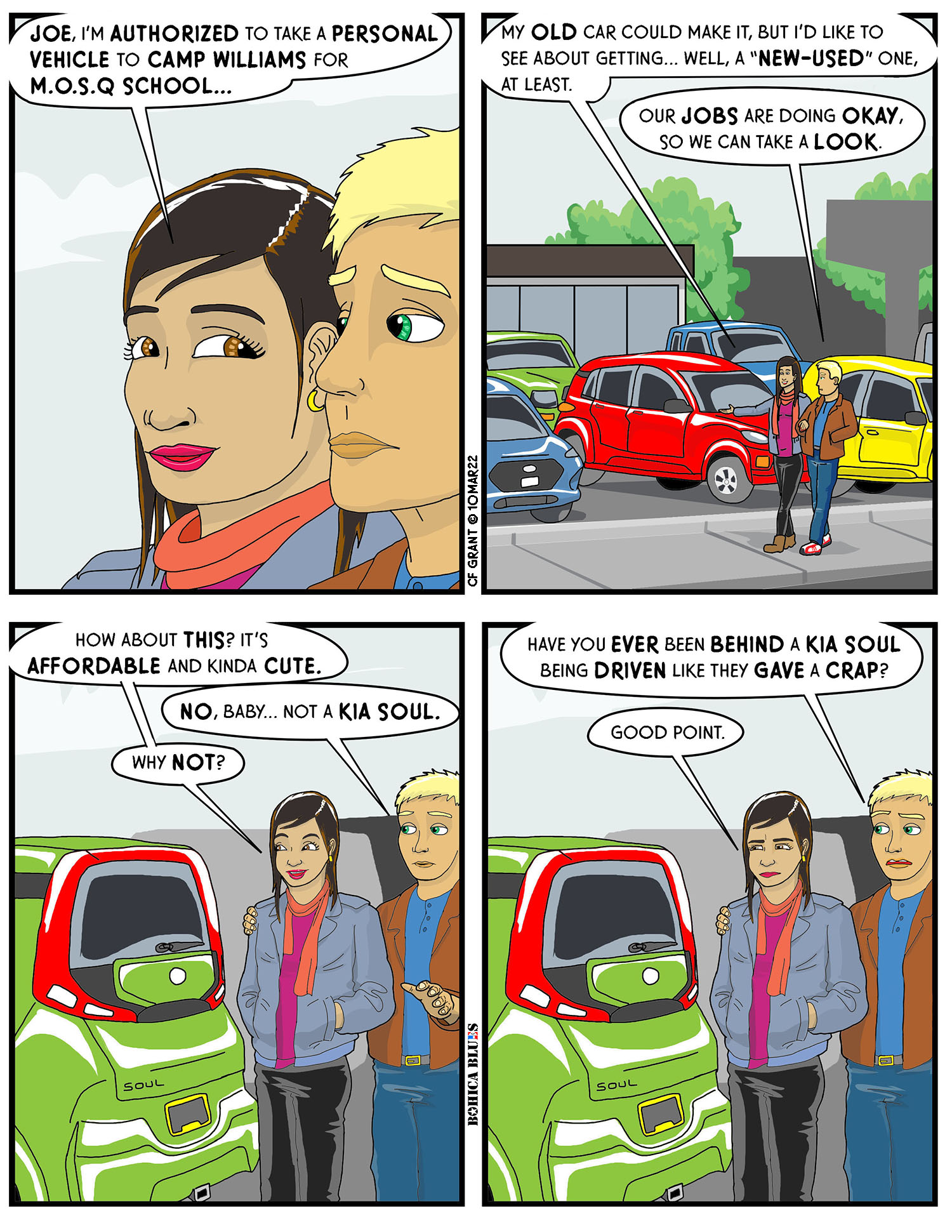 I guess now I’m going to find out how many of my readers are Kia Soul drivers!

So everyone in the Army has what’s called an MOS, or Military Occupational Specialty. It is spoken aloud as “Em-Oh-Ess” (never pronounced as “moss”) and it is an alphanumeric combination that references your job in the military. For example, Infantry is 11B, usually called “Eleven Bravo” when spoken aloud; Intelligence Analyst is 35F and spoken aloud as “Thirty-Five Fox”; Combat Engineer is 12B (“Twelve Bravo”) and so on.

When you join the Army (or really any military branch) you first go to Basic Training and then you go to some sort of advanced job training school where they give you your MOS. In the Army this advanced school is called AIT, pronounced as “Ay-Eye-Tee” and never as “ate”. By their powers combined (Basic and AIT) you become a fully employed and mission-capable soldier.

But what if you want to change jobs?

It is possible to change jobs in the military. It is usually done at the end of one term of enlistment, and before you sign up for another term. You might also change units, and sometimes the Army reclassifies some jobs or does away with jobs they find no longer relevant. If you change jobs, you have to go to “MOSQ” school, for “MOS Qualification” school (initials like this in the Army are written without dots between them– I used dots in the comic to spell out M.O.S.Q in case a reader unfamiliar with the term tried to read it as “mosk”)

MOSQ Schools exist for pretty much every MOS and there are schools for different things scattered around the country. Schools for radio operators, Artillery, and Intelligence are located at Camp Williams, Utah, which is a little south of Salt Lake City. This is convenient for troops stationed in Boise, Idaho, because the drive is relatively short (by the standards of the western United States)) so anyone going to train there can just drive their car and get reimbursed by the Army for the fuel.

So Juni is going to leave her old job and change to Intelligence (there was foreshadowing to this in some comics many months ago) and so now’s as good a time as any to get a new (or new-used) car. I had this story planned out before the current economic crisis made new and used cars more scarce, but they are not 100% gone so I’ll go ahead and go through with it.

As for Kia Souls, well, I honestly have nothing against them personally. I’ve ridden in a few and they seem comfortable and capable enough. I liked the idea of Juni specifically wanting a Korean-made car after seeing an episode of the Canadian comedy TV show “Kim’s Convenience”, in which the father, “Appa”, played by Paul Sun-Hyung Lee, insists that his daughter only buy a Korean car instead of a Japanese one.

But there seems to be something about the Kia Soul that attracts a certain type of owner-operator; someone that… well, let’s say they’re more in touch with the journey than getting to the destination. There’s technically nothing wrong with that, it can even be kind of Zen to just ease back on the accelerator and enjoy the ride… but I’m not paid for my commute, you know?

Until next time, drive safe.