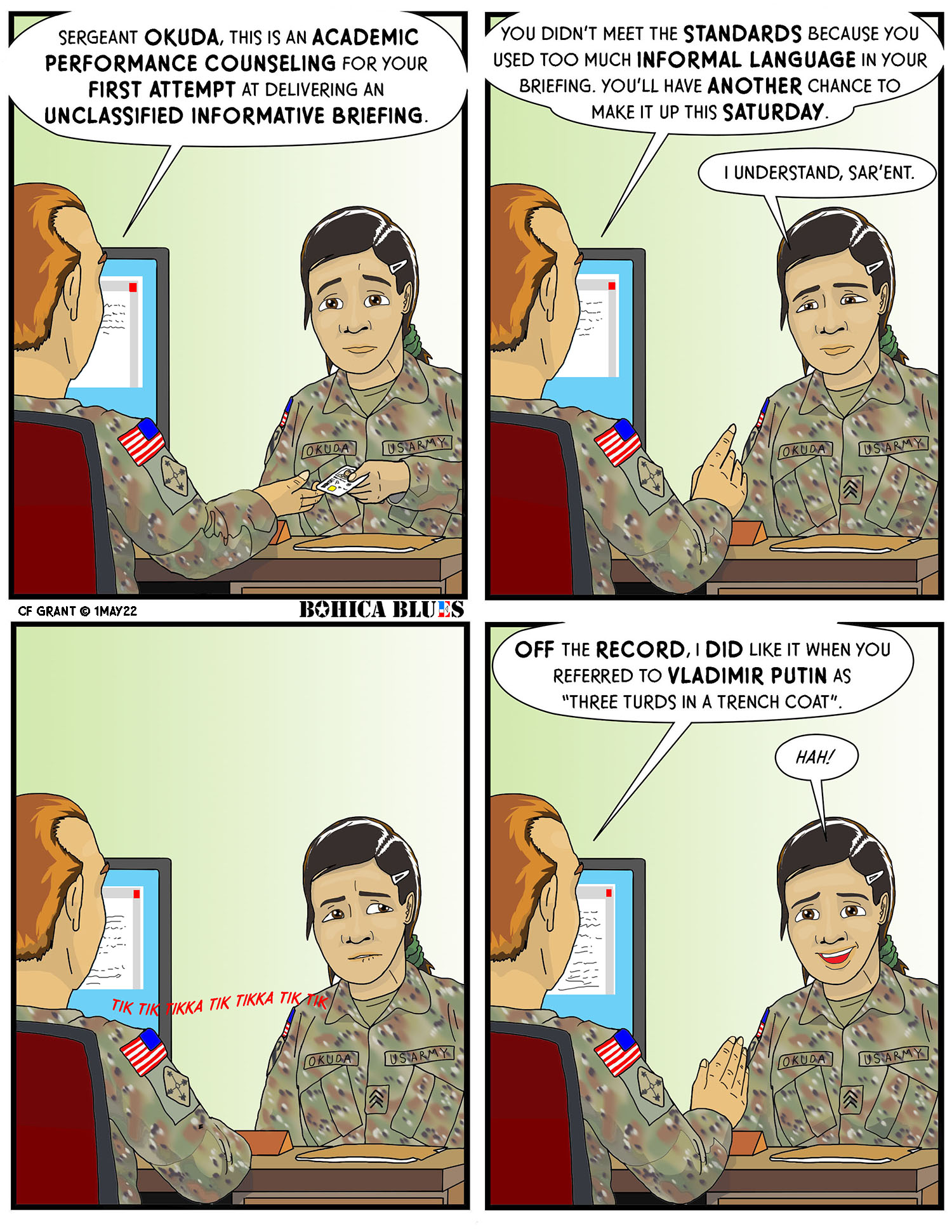 This is the regularly planned/scheduled comic; the crossover with GI Low and PVT Murphy will continue!

When you’re watching the news on TV or a streaming service, or even an entertainment show, you might see a military official stand up before an audience and give a briefing. The military has four types of briefings: the “information” briefing; the “decisional” briefing; the “mission” briefing; and the “staff” briefing.

In entertainment shows, you usually see military characters deliver “mission” or “decisional” briefings. These are great ways for someone to logically explain to the movie-watching audience what is about to happen, as well as how, and why it is dangerous for the heroes to attack their enemy. It is one of the rare times in entertainment where a solid chunk of exposition –guided explanation told directly to the viewer– works perfectly and fits logically into a script.

A “decisional” briefing explains to the audience why the President decided to launch a nuke at the incoming asteroid/monster/alien, where the pros and cons are weighed before pushing the big, shiny red button that summons Michael Bay.

In the real world, we often see military personnel giving briefings on the news about things like military activities in another country, such as Ukraine. Those are “informational” briefings, in which the purpose is simply to give information to the audience, and no decisions are expected, and no one is being assigned a mission.

“Staff” briefings are just that: a briefing to the staff about how activities are going to be conducted. It’s a little bit “information” and a little bit “mission”, and mostly pretty routine, administrative stuff.

Of these four different types of briefings, you can format them to be “formal” or “informal”. When you see a General in a fancy dress uniform with shiny buttons and awards, pointing to a map of Ukraine on monitor that rests on a polished oak table as he or she explains things, that is a “formal, informative” briefing. Any briefing can be made “formal” or “informal”, depending on the perceived needs of the people giving the briefing.

And on top of that, you have briefings that are “classified” or “unclassified”, which obviously relates to the things being discussed. So you can have “Classified, Formal Staff briefings” which probably happen at the Pentagon or other high-up headquarters; or you can have an “Unclassified, Informational briefing” which can happen pretty much anywhere at any time, in daily work uniform.

Of course, the military has standards and expectations about how you conduct yourself in any briefing. Even an informal briefing needs to be done in a professional and respectable manner. There are things you can and cannot do with your hands; they try to iron out the subconscious “ums” and “uhs” that people put into their speaking, and so on.

But you can also get in trouble for using too much “informal language”. Speaking in slang or acting too familiar with the audience, even if they are close friends, is frowned upon when making a proper briefing. So if you start a briefing with, “Hey everybody, how’s it going? I’m gonna talk about Ukraine today; check this crazy stuff out” would get you downgraded.

In Juni’s case, she couldn’t help herself; but with military courses you typically get the opportunity to make up something with another chance. It might mean a minor inconvenience, like coming in on the weekend to fix your mistake, but it is rare to have a 100% zero-tolerance policy.