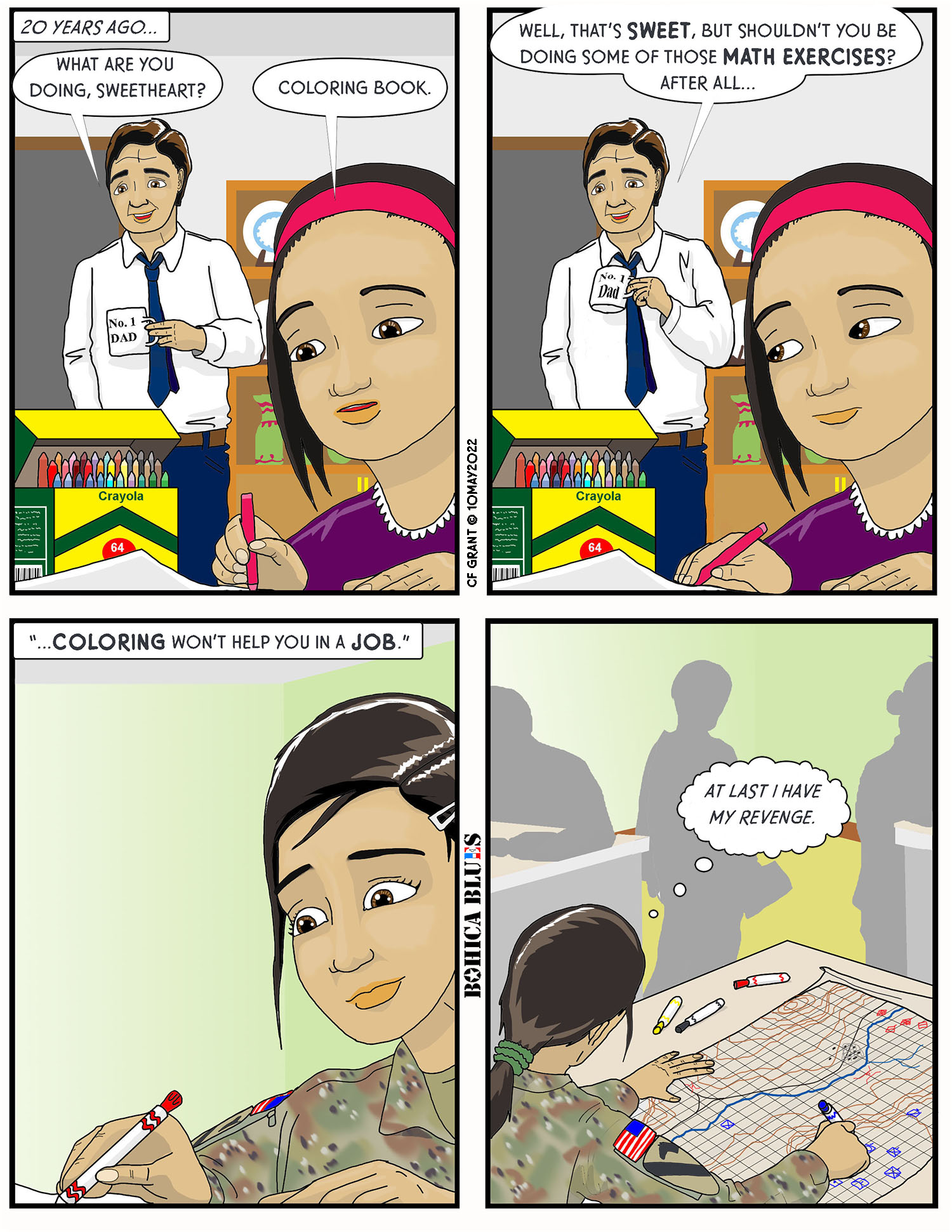 One of the funny things about working in Intelligence is that you have to color maps in with all sorts of arcane symbols that denote troop units by type and size, and they all have to be color-coordinated. A set of key colors are used to denote not just friendly and enemy units, but neutral or non-combatant units, as well as key features for terrain. Impassable or difficult areas such as forests, urban terrain, and so on are all denoted by different colors and patterns.

I practiced some of this map-coordination stuff, and I can assure you, this was one of the few times in my life when I can say that having a passable familiarity with cartoon illustration put me at the head of the class. Take that, all you math teachers who said I wouldn’t get anywhere by doodling! Hah!

In truth, these days a lot of this type of stuff is done on computers, using electronic graphics and pre-made patterns. Fair enough; not everyone is good at illustration and the computer graphics are probably faster and easier to update as situations change. But it’s all fun and games until the power is lost or the generator is destroyed… then it’s step aside, lesser people, a cartoonist is here to save you, Bwaa-haa-haa!

In a recent video I used the inking and coloring of a part of this comic to talk a bit about the strained relationship that Juni had with her father as she grew up. Her dad is Japanese and her mom is Korean, and when Juni was growing up her dad bought into the image of the “Japanese salaryman” as the bread-winner for the family, so completely job and success focused that he spent all his time at work, or at home talking about work… and for Juni, talking about better grades for better schools, and all that.

Juni ended up closer to her mom, identifying more with the Korean side of the family. When Juni got deployed to Iraq, her dad realized he could lose his only daughter, and tried to become more approachable. When Juni and Joe got married and had their daughter, Josefina, then her dad Riku “Rick” Okuda changed and became a relaxed, easygoing guy trying to repair years of distance.

Their relationship is on the mend these days, thankfully, but it took time.