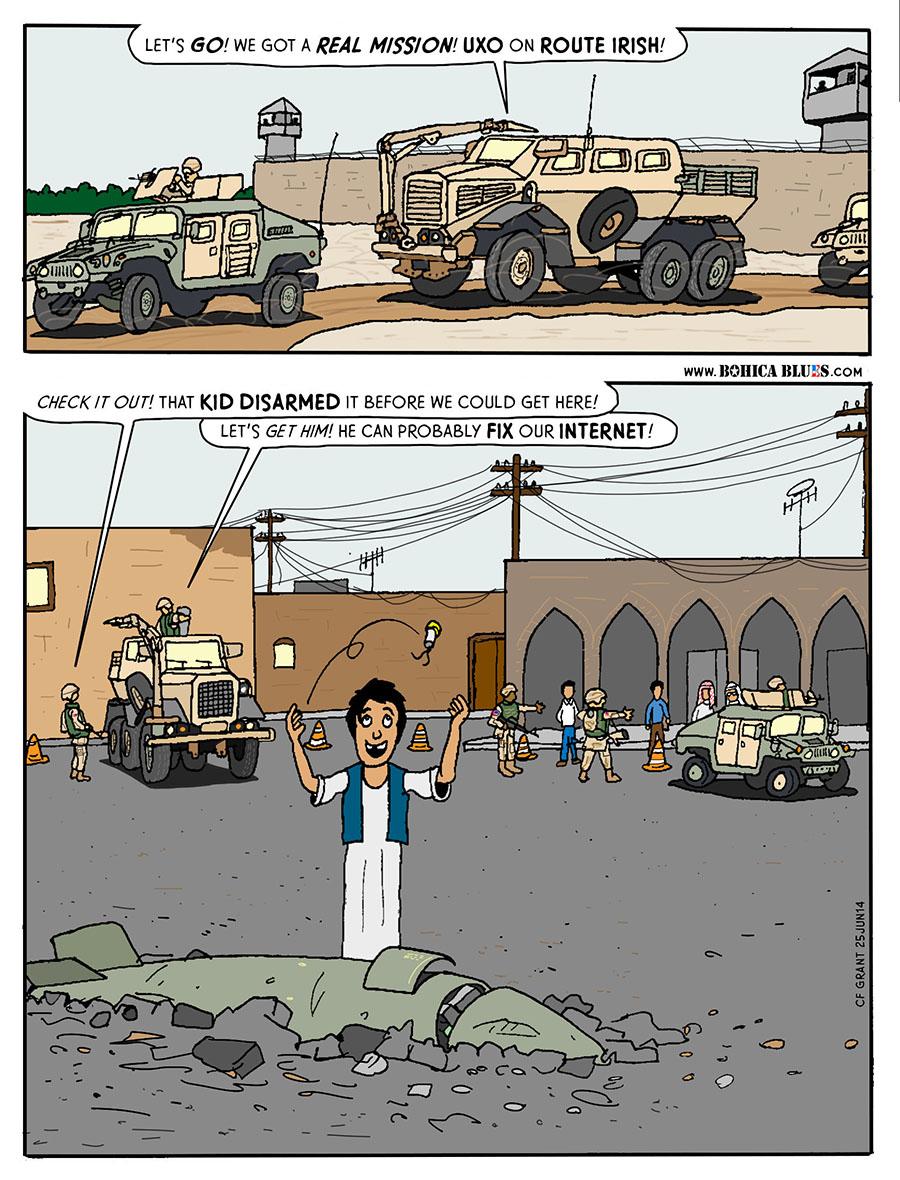 25 JUN:
UXO: Un-eXploded Ordinance. A UXO would be like a bomb that was dropped from a plane but failed to go off. It’s dangerous for, well, obvious reasons. But it’s presence usually represents an accident of some sort– it was supposed to go off on impact, but didn’t. Now, someone needs to go out there and blow it up in a controlled way.

It’s different from an IED: Improvised Explosive Device. In IED is an explosive deliberately set by someone as a trap.

Realistically, there’d be more of a danger from an IED on Route Irish (our name for a main road that ran into Baghdad) but most of the time IEDs are hidden, and the audience wouldn’t necessarily “get it” without reading the explanation. IEDs were disguised to look like piles of garbage or even hidden in dead animals, or lumps of dirt and rock. A non-military reader might wonder why a kid would need to disarm a pile of rubble. On the other hand, a classic finned-bomb shape is instantly recognizable.

But UXOs still happened; we came across them every so often– leftovers from the initial invasion, or even the 1991 war or as far back as the Iran-Iraq war, in the 1980’s.

The best way to get rid of an explosive of any sort –either a bomb that failed to go off and becomes a UXO, or a bomb deliberately set as a trap to make an IED– is to cordon off the area, push people back, set up sandbags and stuff around the bomb to contain the detonation as much as possible, and just blow it in place. In the movies, the sweaty hero in the big suit agonizes over cutting the red or blue wire while dramatic music plays… not so much in real life. Best to just make it go BOOM and be done with it. Here, people are being pushed back, as the initial cordon is made, later they’d be pushed further back– a few blocks, actually, considering the size of this bomb. That is, until Short Stack here beat the guys to the punch.