Now With Even MORE New Uniforms..! 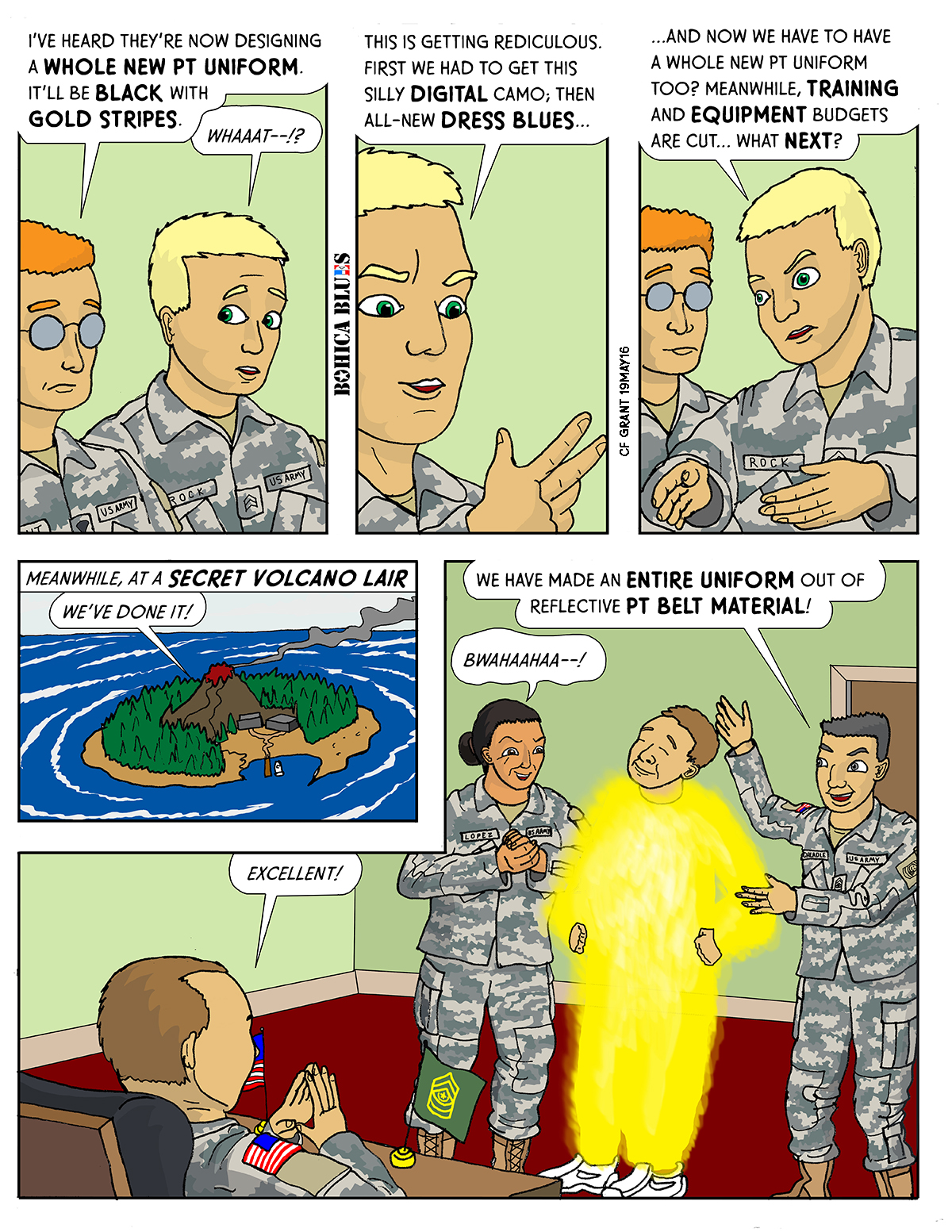 Now With Even MORE New Uniforms..!

I think I’m going to use the “Secret Volcano Lair of Sergeant Majors” from time to time. The idea of a “Dr. Evil” cabal of SGMs coming up with foolish delights has a certain appeal to me.

That said, the proliferation of new uniforms in recent years has become an object of ridicule by a lot of people. Originally, the services shared one uniform pattern, the classic Woodland camouflage “BDU”, or Battle Dress Uniform. The exception was the Navy, which had “dungarees”, dark blue pants with a lighter blue shirt. There was a desert version of the BDU called the DCU, or Desert Camouflage Uniform, which was rarely seen until the Iraq War. The BOHICA Blues characters were wearing the DCU during much of the comic’s story in Iraq.

Then, one day, the Marines came up with their own uniform. It was digital, had some changes in color –some subtle, some dramatic– and by all rights offered better concealment. The US Marine Corps also took the step of patenting the design so no one else could use it. There is a sense of pride going on with that, since the Marines frequently have issues with having to use left-over Army equipment (there’s some truth to that although I don’t think it is as bad as they say).

Suddenly, everyone had to have new uniforms. And it didn’t stop with daily work & field uniforms, either. We had a relatively new physical training or “PT” uniform since the 1990’s, and new fancy dress uniforms made as well since the mid-2000’s. Yet another new PT uniform was recently announced, the black and gold one mentioned above. And during this time, the Air Force came up with their new uniforms, a tiger-stripe design, and the Navy came up with a weird “water camouflage” they call “blueberries” due to the blue spots on it. It is actually fairly dangerous since it does not blend in with anything on land (camouflage, remember?) but makes it almost impossible to find a sailor that has fallen overboard and is in need of rescue at sea.

Given how much Sergeants-Major love to pile on reflective PT belts on everything, I figure it is only a matter of time until they make a whole uniform of the stuff, after which they will probably decide that it needs a special “dark, non-reflective” PT belt for contrast.

As for all the new uniforms, it actually got so bad that Congress, in a rare moment of clarity, told the Defense Department that this has got to stop. The Army, at least, has been told to pick a uniform and stick with it. The selected uniform is a variation of “MultiCam”, and works fairly well. Eventually we’ll see it here.