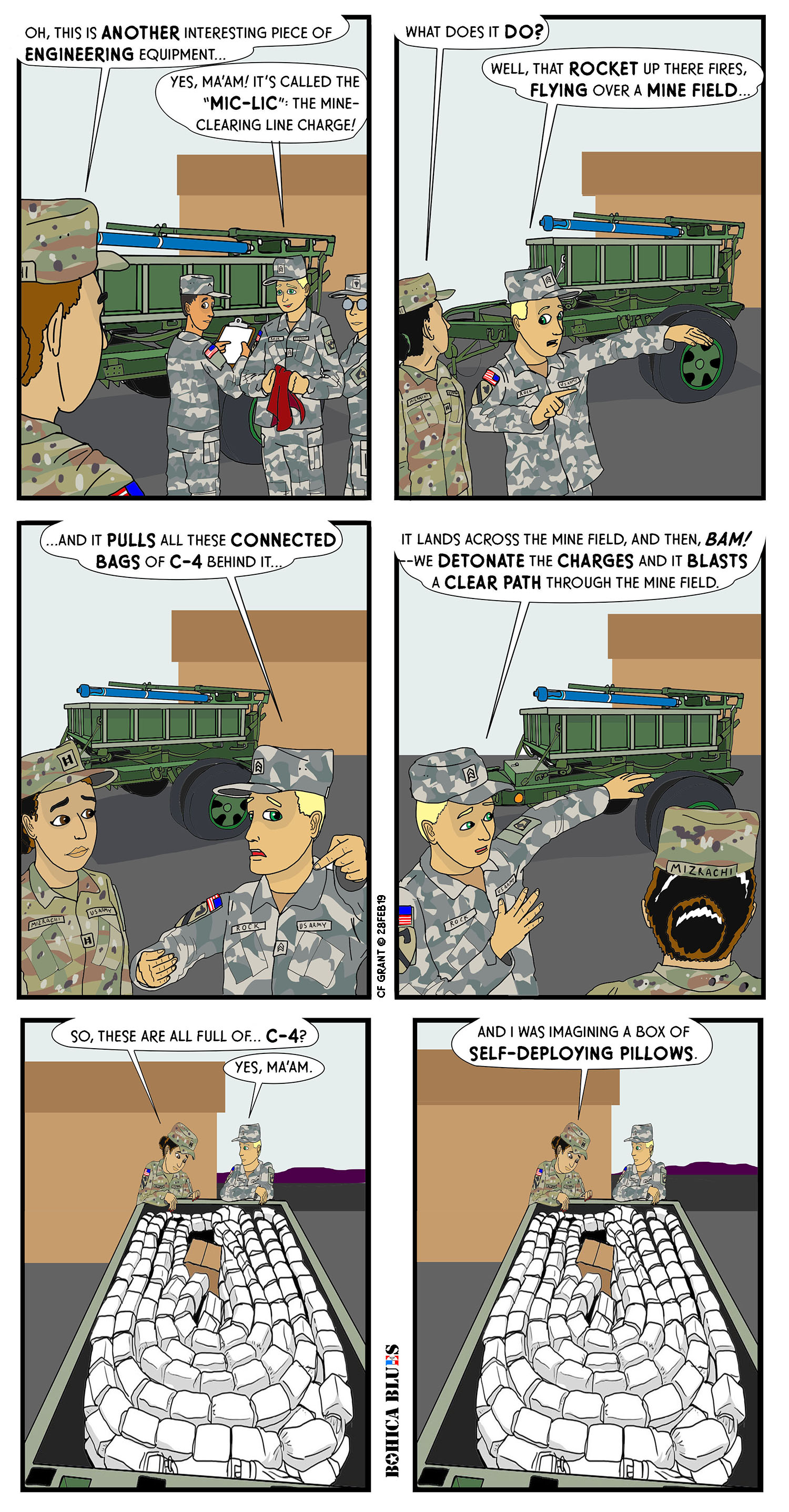 The MICLIC is a real thing, and it is pronounced like “Mick Lick” which probably sounds faintly obscene, especially if your name is Mick.

And yes, it really does look like that image in the final panels: the bags of C-4, or “plastic explosive”, are a bunch of cloth bags all strung together in a huge, long line– hence the second part of the name, the “line charge” part.

The nozzles of the rocket are near the front, up in the nose, and stick out either side; the body of the rocket is pulled behind it, carrying the fuel for the rocket as well as the place where the front of the line of bags is attached. I’ve seen training rocket versions of these fire, trailing inert bags behind them, and it is impressive; people I know who have fired actual MICLICs have said that the resultant explosion is incredible to behold.

The funny thing is, to me anyway, is that the MICLIC does not really look like you would expect a weapon to look like. The rocket doesn’t look like a conventional rocket, sleek and with fins. It looks more like a length of underground plumbing pipe. The bags of C-4 behind it really do look like a row of pillows (although they are hard and uncomfortable– C-4 is like thick, hard clay rather than gooey Play-Doh). I imagine if you did have a massive string of immediate, rocket-deployable pillows you could probably sleep a battalion, easily, all in a row.

As an aside, I’ve heard some stories about these being used on city streets. The story goes that a particular village was being “troublesome” and so as an “example” to the locals to mend their ways, a MICLIC was fired down a street and detonated to intimidate the residents. I’ve heard the story two or three times in the Middle East, but I have to admit I find it hard to believe. The destructive power of that much C-4 (and the less-than-robust architecture in many Middle East towns) would level the residential blocks lining both sides of such a street and leave a trail of destruction that would certainly attract observation. It is possible that a MICLIC was fired close enough to a town that to could be observed, and some windows probably shattered, but that was probably about it. And intimidating the village may not have even been the reason for firing; the MICLIC may have had a legitimate mine-clearing mission that happened to be close to a village. Be wary of urban combat legends. Has anyone else heard this tale? Did something like this really happen, or is it just tall tales?

There’s a lot of old land mines deployed all over the world, left over from wars that are long since ended– what Engineers wouldn’t like an opportunity to touch off a few MICLICs for real and clear some of these pesky old dangers? I’d consider it.

I hope everyone had a good February! Stay tuned for more BOHICA Blues coming in March!