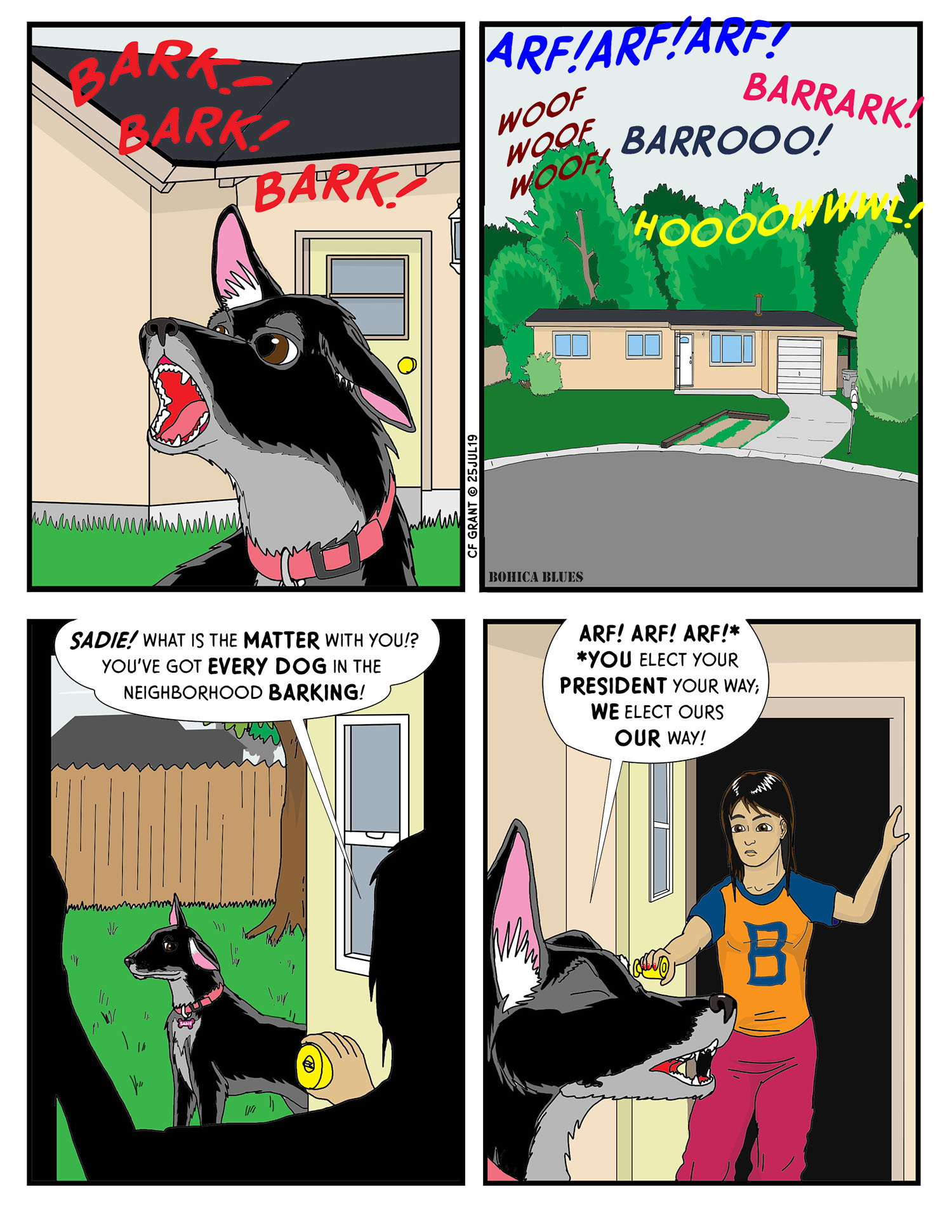 You know the deal– once one dog in the neighborhood starts barking, soon all the dogs in the neighborhood are barking. It’s particularly dismaying when your own dog is the one that kicked it all off. There’s always been a sort of running story about what dog are barking about. In the classic “101 Dalmatians” there was the “Twilight Bark” which was a door-to-door dog messaging service and the barks were coded messages, eventually able to make their way across vast swathes of territory.
I’ve always thought that maybe dogs are having a heated debate about something, or maybe discussing dog philosophy, or something like that. Of course they’re probably all just saying “Hey! Hey! Squirrel! Hey!” But I like to think that maybe it all means something in the grander scheme.
Anyhow, I will close out the chapter with a couple of “at home” comics, today and Monday, in these cases involving the dog, Sadie. I’ll probably use “back home” pieces to round out chapters. When we see the rest of the Battalion again on next Thursday, they’ll be in Kuwait, drawing vehicles, patching over to their new Division (I should have already done that but I was distracted by getting the book done) and bringing in a couple new Patreon characters for people who have been extremely patient with me.
Oh, that reminds me! This is the last week to go to Patreon and sign up to be a Sergeant for a SPECIAL DEAL! If you sign on as a Sergeant by the 31st of this month, and stay on as a Sergeant until the 1st of January, then you’ll get a copy of “BOHICA Blues: Mobilized!”, the first collected volume of comics of BOHICA Blues! It sure is weird to go back and see the old, old art (apparently I drew Joe with blue eyes for a while, weird). There will also be four character profiles not seen anywhere else outside the Patreon subscribers.
Go to Patreon and check it out; there are some articles made public as an appetizer! Follow the link below and check it out, or cut and paste from here: https://www.patreon.com/Coyote
213th Battalion @ Patreon!