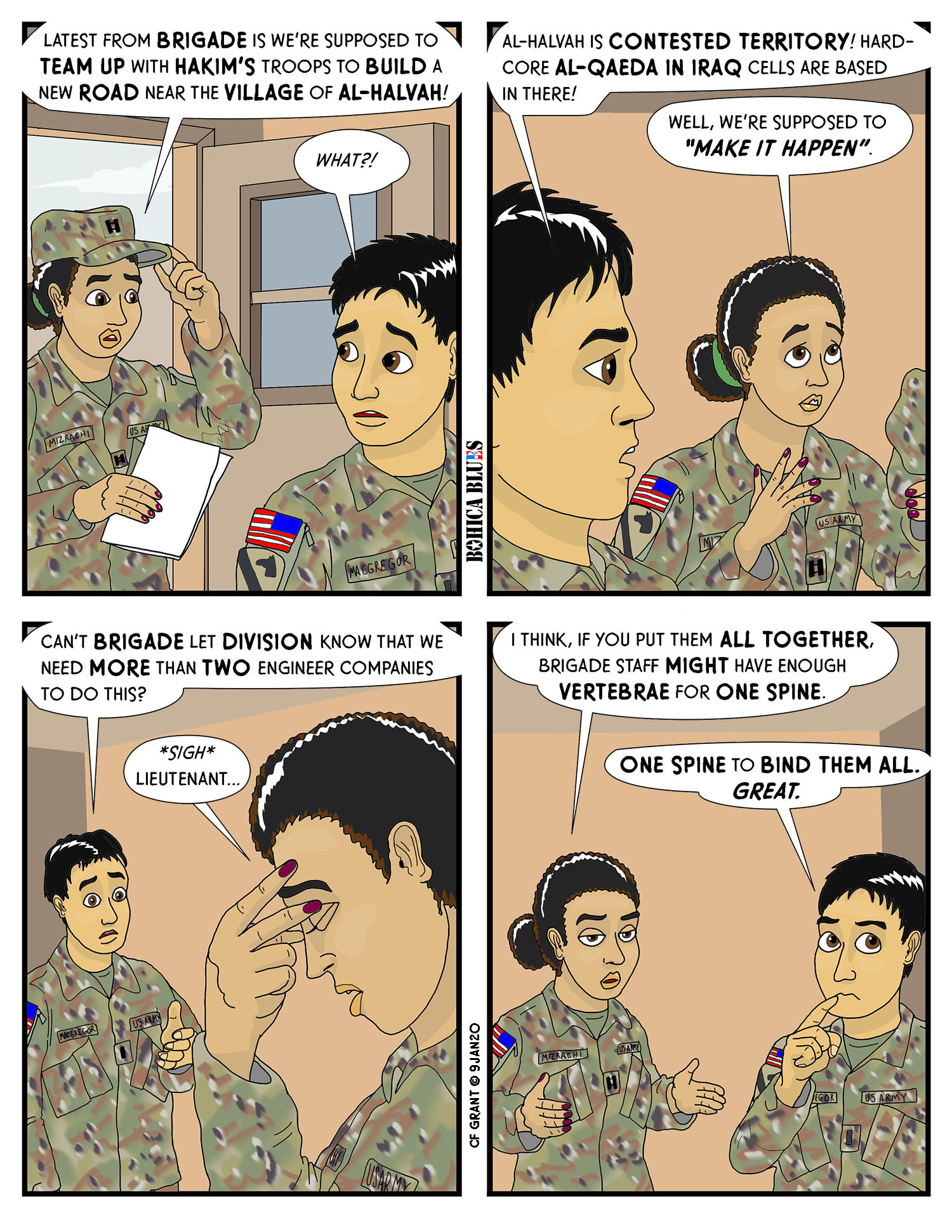 The village of “al-Halvah” is fictional; “halvah” is actually a sweet snack from the Middle East that involves sesame paste. I’m using it as a comical town name here, and it means, “The Halvah”.

Al-Qaeda in Iraq, however, was not fictional and they were some of the most active insurgents at the time. At this point in the comic, we are around the year 2009 or 2010, give-or-take a few months, since I’m not adhering strictly to actual real world timelines in all things (technically they should still be in the older “digital” uniforms, for example). Around 2009-10, Al-Qaeda in Iraq was still an al-Qaeda offshoot, but in just a few years they were destined to break from Al-Qaeda and form the basis of what would grow to become the self-proclaimed “Islamic State”, sometimes called ISIS, ISIL, or the Arabic put-down, “Daesch”.

So for those reading along who are not experienced in military life, there are multiple levels of command in the Army. I’ve touched on many of them in the past, but at this level here a “Division” is usually over 10,000 people (historical examples may vary) and they pass down orders to a “Brigade”, which could be anywhere from 2,000 to 5,000 people (it’s determined by type and mission, not just a set number of people), and Brigade passes down orders to a “Company”, which is about 100 to 200 people or so.

If a Company gets an instruction from Brigade, they know that the instruction probably came from higher up, at the Division level, and is part of some much larger, all-encompassing plan of some sort.

The problem is that the folks at the higher levels are paid to think in larger, grander terms, and not to get bogged down in details. But often that can mean that they don’t see some of the necessary details that might need attention. This is not a problem limited to the military; civilian companies can have this problem, academic institutions, civil service, and so on. It is universal to the human experience.

Ideally, the people in the middle are supposed to put a brake on out-of-control ideas that are unhindered by reality, and gently remind the higher-ups that the task they have passed on to subordinates is too much. But when you have a staff that values their own careers (or sometimes egos) primarily, they’ll pretty much just rubber-stamp those ideas and expect miracles to make them look good.

That, too, seems pretty universal to the human experience.

While you’re here, don’t forget to stop by Patreon and consider joining me there and support BOHICA Blues! There’s been some recent content that is available to the public without subscription, and there are plenty of open spots! I’ve had a but of a lull period there for the last week but I have a lot more stuff coming and there are already over 1,000 images over there to check out so new arrivals will be busy enough as it is.
Check out Patreon and join the Battalion there today at this link!: https://www.patreon.com/Coyote