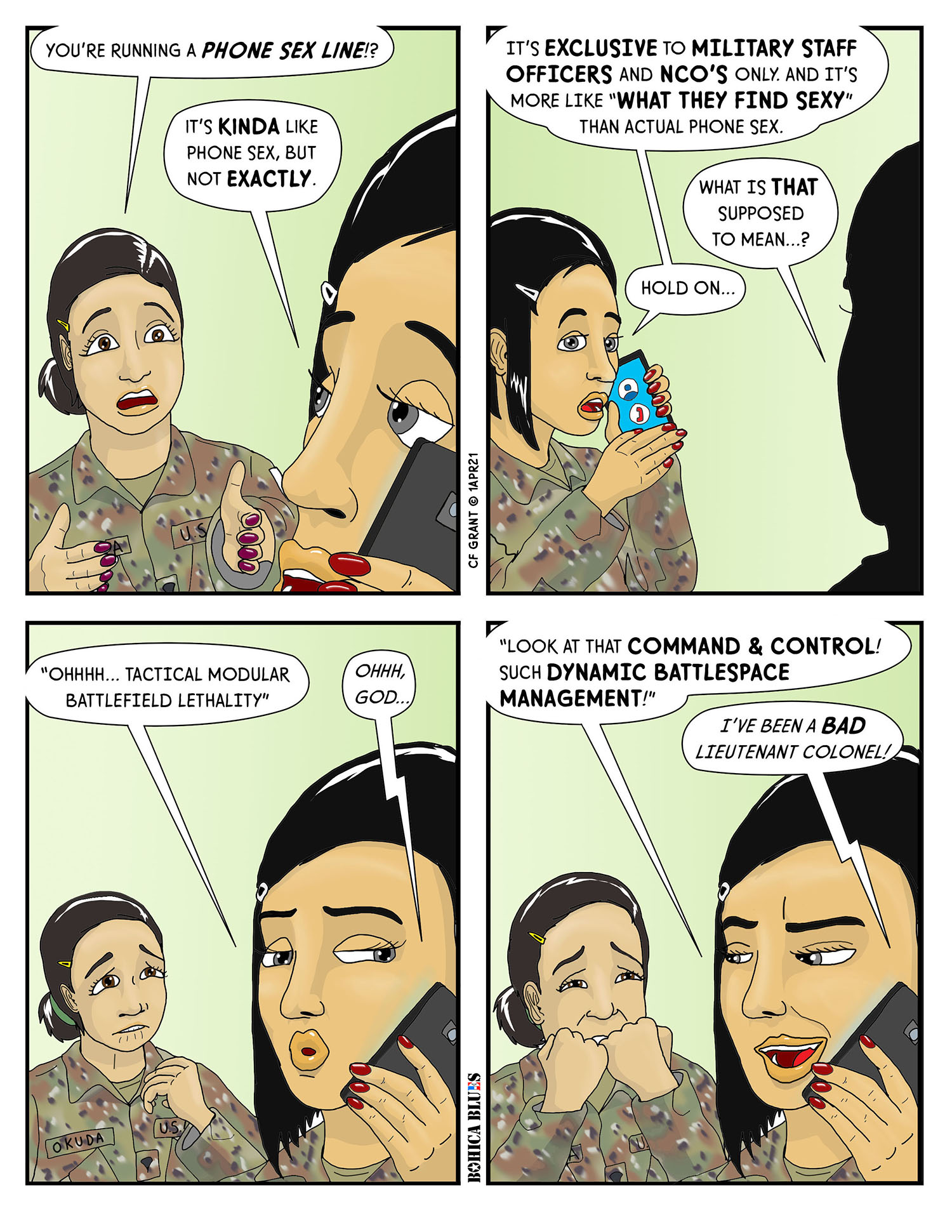 April Fool! So, no, Nikki Donner isn’t actually running a phone sex line… but she has found a parallel way to make money spicing up the lives of those lonely staff officers and NCO’s that need a few whispered buzzwords in their ears to perk them up in these final days before the warm weather really starts to take hold.

It seems to be universal that as one climbs the ranks in either military or corporate power structures, a sort of transformation takes place. I mean, sure, there’s the different power dynamics and stuff but I’m talking about a weird fascination with increasingly florid language and the addition of more and more buzzwords and jargon. Jargon –words that have specific meaning and impact within a particular skill set– is one thing (kind of a necessary evil) but we’ve all seen an increase in buzzword usage as well.

Buzzwords in Wikipedia are described as “[…]derive[d] from technical terms yet often have much of the original technical meaning removed through fashionable use, being simply used to impress others.” The words have had all meaning stripped away since they are now repurposed as adjective layers.
Common examples of popular buzzwords currently fashionable (as of this writing, anyway) in the military are things like “lethality” and “modular” and “enhancement”. I remember after the 1991 Gulf War and the Somalia mission the Army was undergoing some restructuring, and so the buzzword “interim” was tossed about like a tennis ball at a dog park. Then there was the OICW, the “Objective Individual (or was it “Interim”?) Combat Weapon, a failed experiment to replace the M16; the name is nothing but a stitched-together patchwork of buzzwords, with only “weapon” being relevant (like, did we need “Combat Weapon”? What else were you going to use that weapon for? Carpentry?).

The business world has this, too, with corporate hierarchy being notorious. “Leveraged” is a popular one, as are nebulous terms like “core competency” and “synergy”, which has made a jump into some military planning nowadays (it also seems to have replaced the German term “Schwerpunkt” or focus-of-effort/center-of-gravity, which itself I only heard used correctly a few times).

People like their jargon and buzzwords. It makes them feel like they’re part of something bigger, maybe a secret society of arcane knowledge; gatekeepers to a realm you wouldn’t understand. Jargon has its place, but buzzwords frequently don’t impress so much as they do annoy. I like to think that any new weapons program being considered by the Pentagon is being charged an extra $1 million dollars per unit for each buzzword attached to it.

But as Private Donner has found out: if they’re willing to pay…