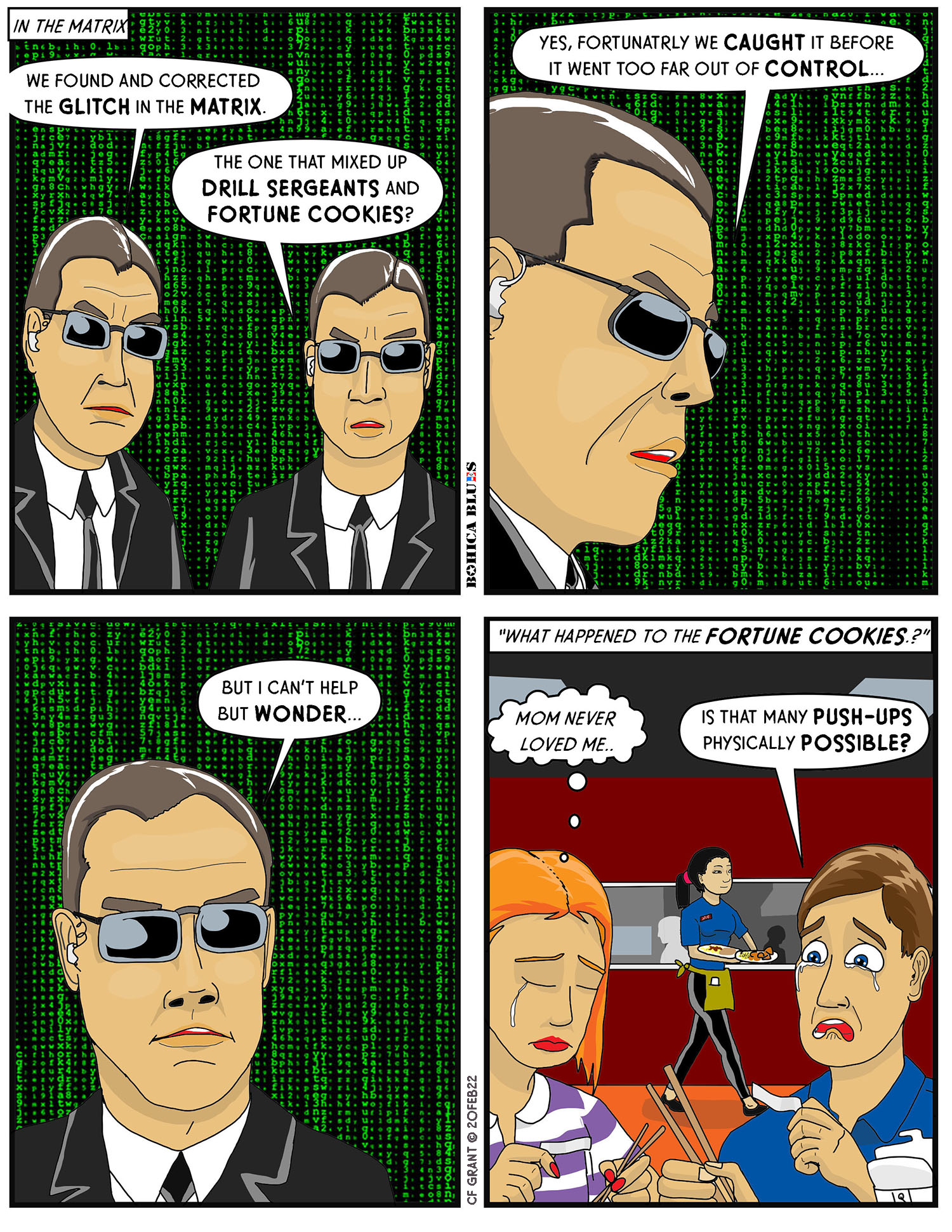 Another “Matrix” inspired comic. This time, the Agents have fixed the mix-up between Drill Sergeants and fortune cookies, but now it begs the question… what about the fortune cookies?

Assuming the things normally said by the Drill Sergeants have been transferred to fortune cookies in the Matrix, you can bet that people are being informed, through their food, that their parentage is questionable, their abilities mockable, and to do push-ups more or less until the heat-death of the universe. And probably something about comparing them to maggots.

Actually, from what I’ve heard from “the kids these days” (wow, I really went there), Basic Training has changed. It reflects the fact that enlistees nowadays want to be there; they are volunteering and probably don’t need to be “pounded into compliance” like unwilling draftees were Back In The Day. When I went to Basic Training, Drill Sergeants weren’t allowed to punch or strike you, in fact, they really weren’t supposed to lay a hand on you at all. Of course, some people insist that this rule was sometimes ignored when convenient, and maybe, but I personally never saw it. However, when I went in, there were still a few people in the Army that were from the era of being punched by Drill Sergeants… and, of course, there was lamentation that “today’s Basic Training is soft”, etc.

Nowadays –so I am told– the Drill Sergeants aren’t allowed to insult you personally, but they can insult the group in general. So they can’t single out one enlistee, put them on the spot, and say “you’re a miserable failure”, since that is individually humiliating and degrading. However, they can excoriate the whole group, and say, “you’re all a bunch of miserable failures”, since that doesn’t single any one person out.

I’ve heard other things, such as that Drill Sergeants are now expected to act more as mentors and teachers rather than, well, skull-cracking instruments of terror. And that physical exercise as a means of corrective action (ie, doing those infamous push-ups) is also not allowed anymore. I have no idea if this is so, but some of what I’ve heard and I have no way of separating tall tales from actual experiences. I also generally don’t have the time or the interest, as well, especially since it sounds like people are having different experiences based on where they trained at.

As an aside, there’s also the infamous “stress cards”. Apparently these were a thing, at least at one time. What I heard was that trainees were given “stress cards”, which they could pull out of their pocket and deploy if they felt a Drill Sergeant was getting too harsh with them, and they needed a time out. Like the World Cup, with a Yellow Card! From what I heard, it was an experiment that happened for a few years at Fort Jackson, and was eventually abandoned, although tales of Stress Cards still circulate to this day.

Since I don’t plan on going back to Basic Training any time soon I have not followed up on these. Still, it is interesting to hear from younger troops how Basic Training, or at least perceptions of it, have changed over the years.

As for the Matrix? Well, like a lot of people, I loved the first movie but found the later ones to be less compelling. I hope this comic doesn’t follow the same dark path. The next cartoon will be back to regular business with the fictional 213th Battalion, and will actually feature Juni Okuda.