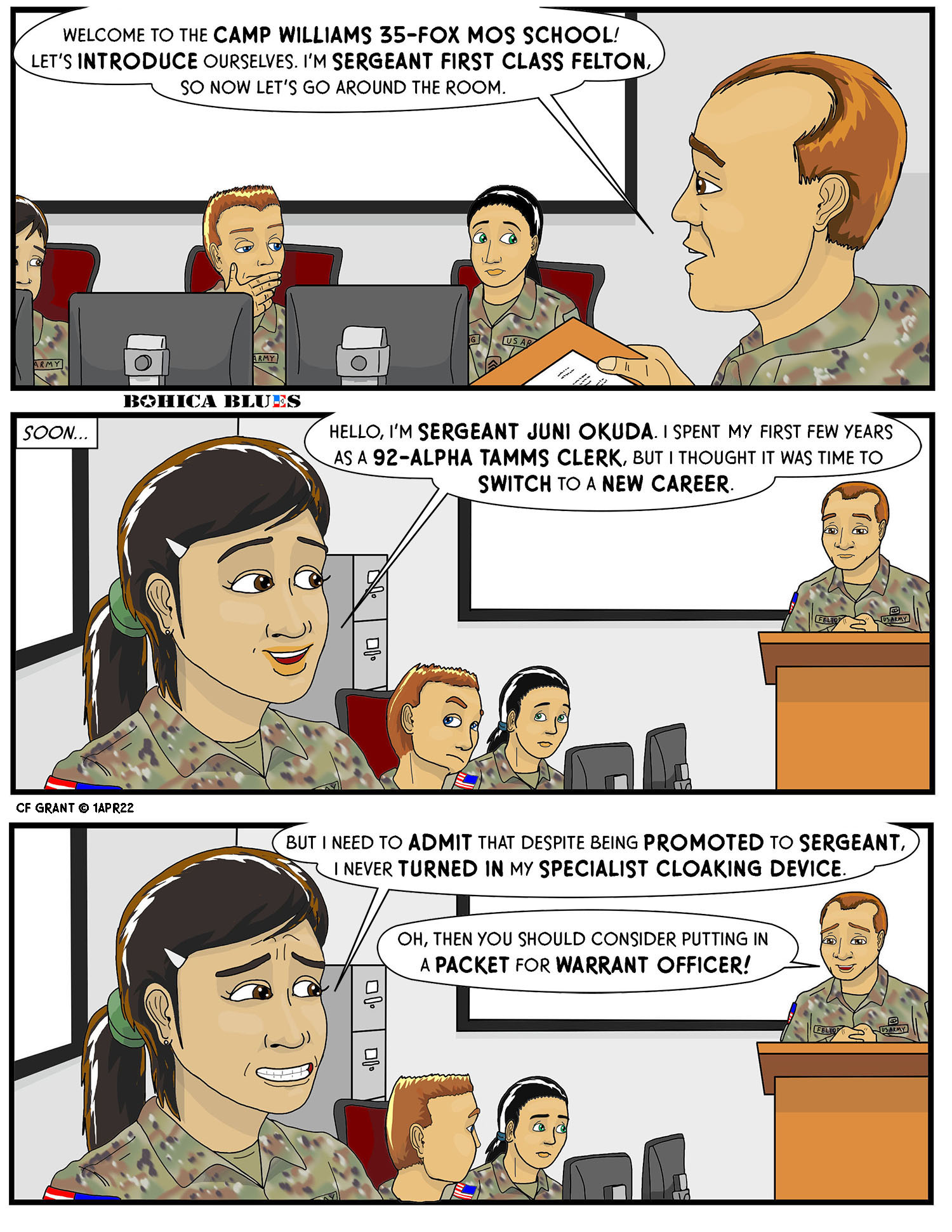 Juni goes to 35F Intelligence Analyst school at Camp Williams, Utah. Anyone who goes to a military school to “reclass” (re-classify into a new MOS, or military job) will end up initially in some sort of classroom environment where they introduce themselves to the rest of the class and give a (hopefully brief) bio about themselves. Usually, name and rank, where they’re from, and what job they used to do previously and why they chose to change. Sometimes personal details are thrown in, like having a spouse or kids, pets, or a hobby.

Military reclassification schools are a great way to network with peers from all around. Most reclass schools are responsible for all reclassifications in an entire region, and that region can be pretty big. I’ve been to military schools that were for reclassing and also schools for job advancement and leadership, and met people from all over the country. Typically, these people are united by a shared goal –the class itself– but we’re also united by a shared experience in the military as viewed through our own unique lenses.

Some reclass schools have a “field phase”, where at some point you go out to a field environment to practice what you’ve learned. You may even stay out one night or more in an austere environment, doing combat training; I’ve been to schools like that. But there are also schools that are 100% classroom/office type environments, usually the technical fields like computer specialties, and things like Intelligence (where Juni is at right now). The Intel school is entirely a classroom type environment.

Because of their shared military backgrounds, students from all across the Army will understand the meaning behind Juni’s comment, and the instructor’s response.

A “Specialist” is a rank that is as high as a regular soldier can reach before becoming a Sergeant and entering the ranks of leadership. As the seniormost enlisted soldiers, Specialists have learned to pick up on the unconscious clues that Army leadership broadcasts before something happens. They’ve figured out the daily “ebb and flow” of duty activity and can sense when things are changing, when something is different or out of place, and they know how to quietly make themselves look busy somewhere else before the younger soldiers get assigned to onerous chores.

Because of this, Specialists have a reputation for “strategic disappearance” to avoid hard duties; this is sometimes joked as the “Specialist cloaking device”, after the cloaking device of science fiction fame that allows entire ships to disappear from sight and scanners.

On the other end of the rank spectrum is the “Warrant Officer”, which I’ve mentioned recently. These are a sort of officer that is highly specialized in one field and have no other command authority or responsibility outside that field of endeavor. Warrant Officers also have a reputation for not being seen, usually because they are deeply involved in doing their specified and unique tasks that they don’t have time for the usual routine check-the-box chores that regular officers have to do.

So if a Specialist gets promoted to Sergeant, but never “turned in their cloaking device”, then they already have half their quest items to reach Warrant Officer, and it is only logical to pursue that goal… and be able to slack off in a higher tax bracket.