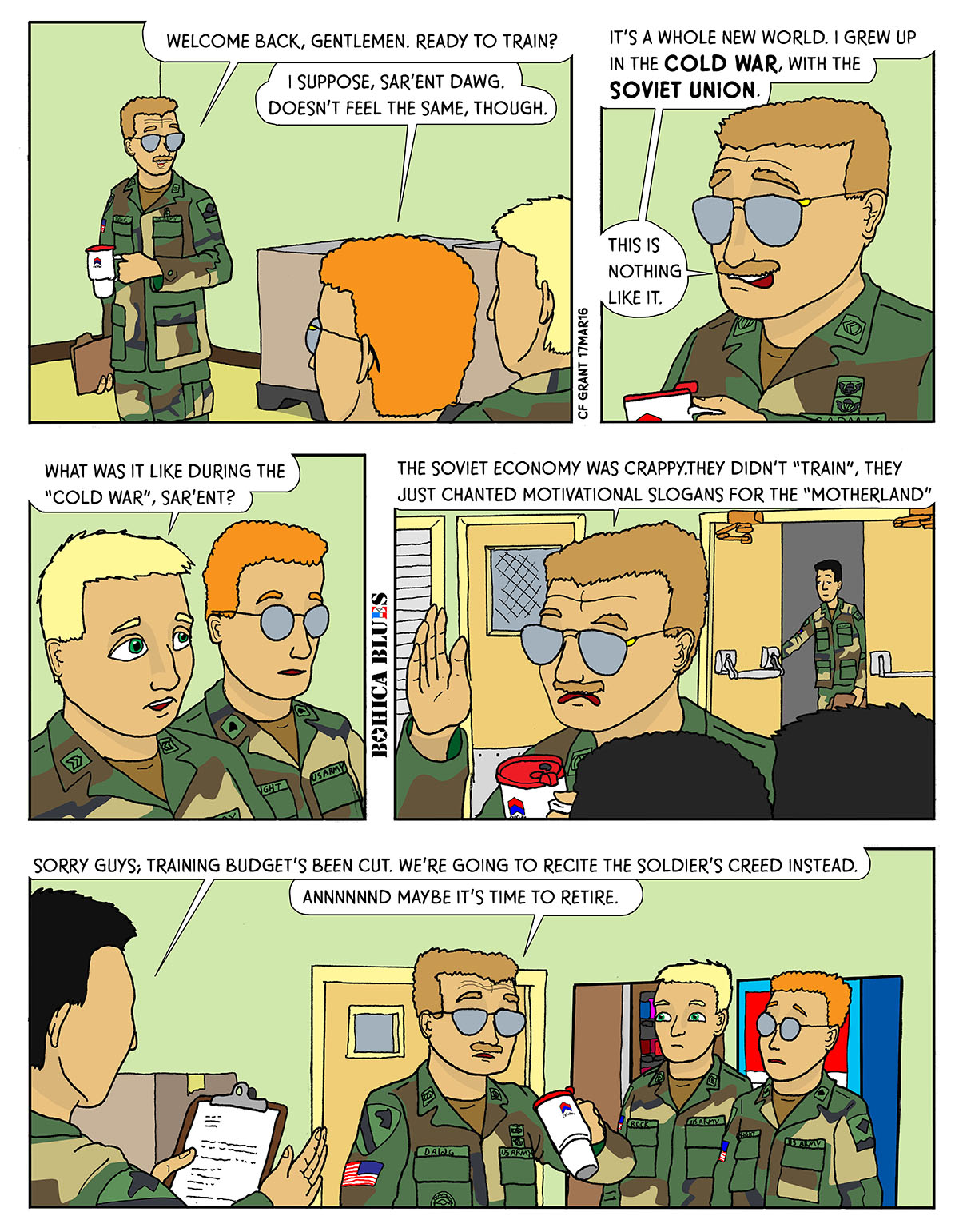 Yes. They started out in, and continue to be in, the Army Reserves. That means they go back to what Army Reserves (and National Guard, a separate organization) typically do: meet for one weekend a month, and two weeks out of the year.

For the comic, this means that every once in awhile, I’ll put them in uniform and have them do some good ol’ Army humor. Then, they’ll return to civilian life to balance work, school, family and friends with all that– just like we do in the real world of the Reserves and Guard. We lose one weekend a month to fulfill these duties, and “weekend drill” always seems to come at the most inconvenient weekend every month.

Aw, poor ol’ Sergeant Dawg. I know how he feels– as a Gen X’er, I caught the very tail end of the Cold War. It was a strange time, that Cold War– the casual acceptance of global-scale nuclear bombardment at any time between us and the Soviet Union. And I don’t know if I’m the only other veteran out there that’s noticed this, but the last few years there’s been this weird fixation on having formations of troops standing together and reciting various “creeds”. There’s a general “Soldier’s Creed”, and an “NCO’s Creed” and various creeds for different branches within the Army (Engineers, for example; I presume there’s others). Am I the only one who finds this sort of Orwellian?

When I came out of Basic Training, we were only expected to memorize our three General Orders. While I can’t remember them word by word any more, I can recall the gist of them– not quitting duty or abandoning your post, adhering to proper orders and conduct, etc. That was all we memorized, and they served a purpose. These “creeds” are just –to me, at least– so much motivational puffery: “I am an American fighting soldier, no one is more professional than I… blah blah blah I’m so cool and hardcore, yadda yadda”.  Seriously, if you have to tell yourself you’re awesome, you may well not be. If you have to stand in a room full of people, each shouting out loud about how totally cool you all are together, then the joke’s on you. We always had this image that the Soviet troops didn’t truly “train”, they just recited motivational brain candy about the glories of Communism and the Motherland and so on.