Caught Up To You 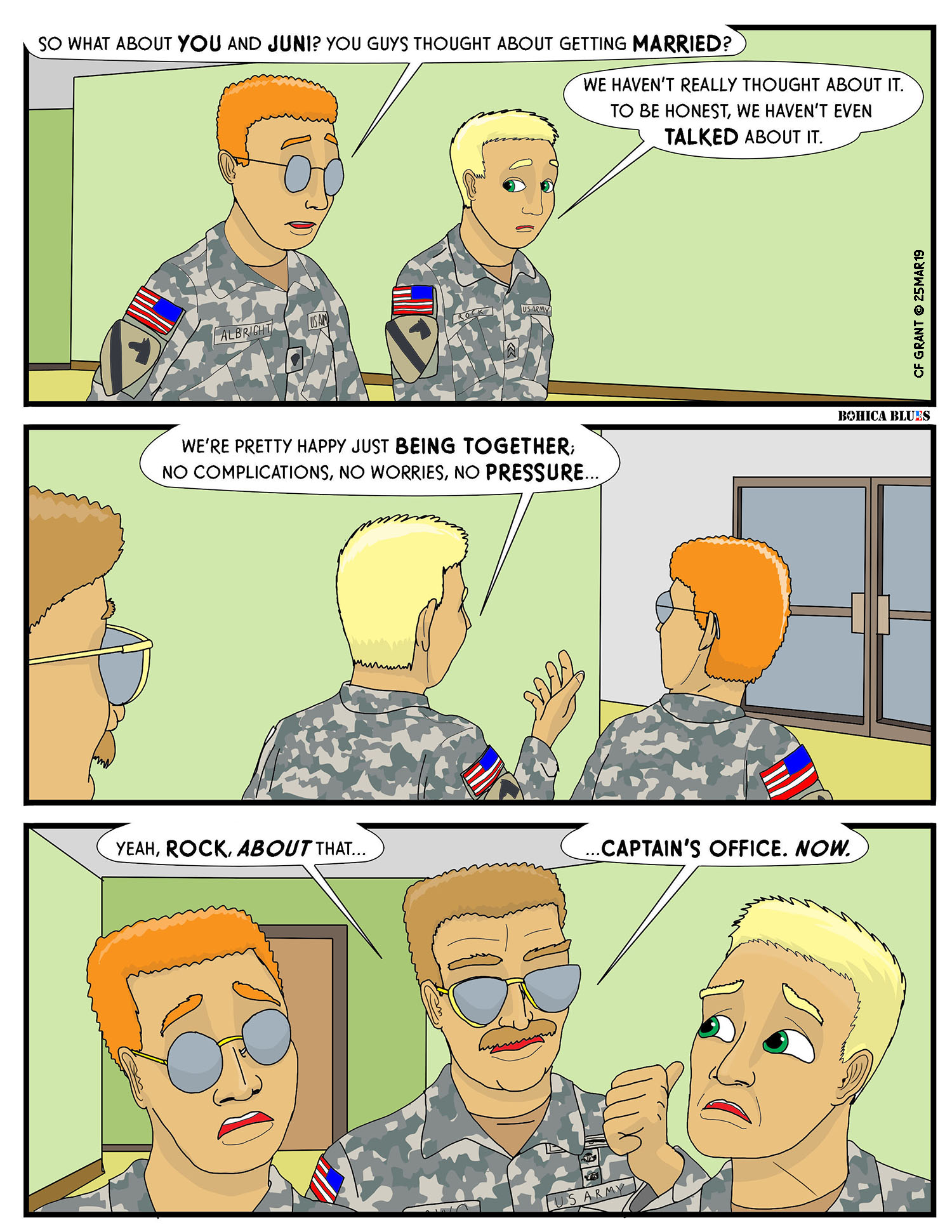 Caught Up To You

Joe is about to learn about changed rules regarding something called “fraternization” in the military.

“Fraternization” is usually a word that comes up during briefings about “SHARP”– “Sexual Harassment And Rape Prevention” classes. Because of this, “Fraternization” has become associated primarily with soldiers having romantic and/or sexual relations between them. However, fraternization actually covers a much wider spectrum of activities.

Any time any soldiers of different ranks have ongoing social contacts with one another outside the scope of their duties, then there is the danger of fraternization becoming an issue. Junior enlisted cam be friends, hang out together on weekends, be roommates, whatever, and it isn’t a problem. Same among NCOs (Non-Commissioned Officers– the various levels of Sergeant ranks) as well as officers. It is a friendship crosses these rank levels that the problem of fraternization comes up.

Fraternization can mean just being regular friends and hanging out together. It can even mean sub-renting a room from someone of a different rank. It does not include one-time issues such as buying a used car (one-time transaction) or situations of personal safety issues (such as if a soldier under you command is too drunk to drive and you let him/her crash on your couch for the night). But regular, ongoing contacts can be problematic.

In the Active-Duty Army, people are transferred to other posts every few months or years. If you’ve been in a post for a year and a half or more, and you still have at least another year and a half left on your enlistment, then chances are good that you’re going to get transferred sooner or later. So this means that by the time you’ve all been Privates, Privates First Class, and Specialists together, right about the time you or one of your friend sis about to get promoted to Sergeant, people are going to be transferred. And if someone gets a Direct Commission to become an Officer, they are sent away almost immediately. This helps lessen the effects of fraternization in the Active Duty Army.

In the Reserve and Guard forces, these are more cloudy. Reservists and Guard personnel are encouraged to get friends and acquaintances involved in units, so people have pre-existing relationships when they join. Spouses, siblings, and cousins, and close friends are relatively common in home units. And of course you end up meeting people that live in your community that you obviously have similar interests with, so friendships are forged that move outside the confines of weekend drills. Command sometimes just have to accommodate this and make allowances, but Joe is about to find that things can get complicated.

Stay tuned for more and don’t forget to check out the BOHICA Blues Patreon page! See ya in the funny pages, so to speak… https://www.patreon.com/Coyote